A powerful plasma ball was spotted over Mt. Fuji and photographed by this writer. The photographs clearly show the plasma burning over the massive volcano. 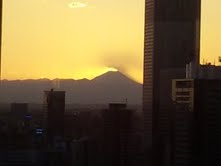 The photograph above and the one below were taken from Shinjuku, near the Tokyo government office buildings.

The photographs have raised suspicions of a HAARP attack by the cabal aimed at setting off an eruption of Mt. Fuji.

To prevent this attack on Mt. Fuji from escalating, retaliation has begun with the stimulation of volcanic and earthquake activity around the Atlantic Canary Islands using highly classified technical means.
Scientists have noted that if the La Palma rock formation in the Canary Islands falls into the ocean, it would trigger at 100 meter tsunami that would hit the East Coast of the United States, large parts of Southern Europe, West Africa and South America.

To avoid escalation, the White Dragon Society strongly urges the cabal to cease all wars and peacefully surrender its criminal control of the Western financial system.

The precise nature of the plasma ball spotted above Mt. Fuji has been determined by Japanese experts to be

the sun. More specifically, the pictures above are of the sun setting over Mt. Fuji and were taken by this writer last fall and saved for the April 1st edition of this newsletter.

However, all jokes aside, the cabal really did threaten multiple times to trigger an eruption of Mt. Fuji using nuclear bombs that have been buried in four locations around the base of the mountain. The threats were withdrawn after counter threats were made to hit the La Palma rock formation with nuclear missiles. This is the kind of criminally insane activity the current leaders of the West engage in. The actual ongoing volcanic activity at the Canary Islands, however, appears to be entirely natural in origin i.e. an act of God.

There is also a lot of seismic activity taking place in the financial world. The shutting down of the banks in Cyprus has apparently dealt a nasty blow to many groups of gangsters including, Sicilian, Calabrese, Camorra, Turkish and Russian mafia groups, according to an Italian P2 freemason lodge source. The more well connected gangsters were able to move their money out to Malta, Morocco and Tunisia, the source continued.

Higher level players were able to take their funds out of Cyprus and into Switzerland, Lichtenstein and Luxembourg, according to an MI5 source. Honest businessmen in Cyprus, for their part, got thoroughly shafted.

The Cyprus money grab has triggered, as mentioned last week, an escalating shift of funds out of Italy, Spain and other EU countries. Political chaos and unrest is also continuing in many European countries, notably Italy, which remains without a proper government.

Both MI5 and P2 sources believe the situation in Cyprus was a proxy war between the Germans and the Russians but it is not clear at this point who got the better of the battle.

However, the announcement by the 180 nation BRICS alliance last week that they were going to start a new development bank to replace the IMF and the World bank is expected to signal an intensifying financial boycott of the Sabbatean mafia controlled NATO terrorist states. The Russian move out of Cyprus before the banks were shut down is definitely connected to these moves.

These same 180 nations have also publicly called for a fundamental reform of cabal controlled global institutions like the UN and the BIS.

There is also a lot of high level intrigue continuing in the UK. The announcement that Jonathan Evans, the head of MI5, was resigning and being replaced by Andrew Parker, was highly irregular, according to an MI5 source. “Usually such a change is announced months in advance and a successor is announced weeks in advance,” the source says. The sudden announcement may be connected to the fact that Evans was clueless about the planned nuclear terrorist attack on the London Olympics, the source speculated.

The other big development in the UK last week was that Prince Edward, the Duke of Kent and head of the Freemasons, had a stroke. This is unlikely to be a coincidence given the highly intense struggles that are taking place throughout intelligence circles these days.

Speaking about intrigues, a very obvious and concerted campaign to feed alternative news media, including this writer, with misinformation is continuing. Once trusted sources have informed me of things like “Henry Kissinger had a stroke”, “Hillary Clinton had been arrested” etc. We could not verify this information and sure enough, shortly after the information was sent our way Kissinger and Clinton both appeared at public events.

The report we made last week about senior Japanese pseudo-right wing politician Shintaro Ishihara being brutally murdered came from a trusted source at Japanese military intelligence. Ishihara, however, appeared on Japanese TV today after a mysterious two-week hospitalization. The intelligence source insists the person seen on TV was a body double but we have been unable to verify this at the time of writing.

However, we can confirm from sources extremely close to Prime Minister Shinzo Abe that he has come down with cancer and suspects he was hit with a cancer causing virus during his recent visit to the US. Abe is now taking hemp extract and has been advised by this writer to take 5000 IUs of vitamin D3 per day and 1 gram of vitamin C every six hours to counter-act the cancer causing virus.

There are also signs of a financial crisis brewing in South Korea, North Korea and Japan. This crisis has several interlocking dimensions. First of all, the Japanese government is considering passing a bill to tax all assets worth over 50 million yen (about $500,000) owned by South and North Korean nationals living in Japan. Since Korean gangsters seized large amounts of prime real estate near train stations during the chaos after WW2, huge funds are involved.

That may explain why a several Korean groups are now offering to trade yen for won at a huge discount to the official exchange rate, according to a South Korean CIA source.

That also explains a lot of the North Korean saber rattling in recent days since the North Koreans secretly control huge swathes of the Japanese economy and are understandably reluctant to have those assets seized by Japanese taxmen.

The other crisis in South Korea has to do with bank loans, he says. Bank officers in South Korea with the authority to approve loans have been taking personal commissions of 10% or more on the loans they approve. This corruption is also leading to a bad loan scandal, he says.

The executive further made an interesting comment saying that “the people above me were Hillary Clinton and Henry Kissinger but they have lost power and we are not sure who is in charge now.”

On a final April 1st news note, Pope Francis has ordered a comprehensive review of the source material of Roman Catholic doctrine and has already made a startling discovery. It turns out that in the year 401 a monk made a mistake in copying documents from the original council of Nicaea. He left out the “r” in the world “celibrate.”