Last week, representatives of Asian groups asked the White Dragon Society to help them cash trillions of dollars’ worth of historical bonds issued by the Federal Reserve Board. The WDS agreed on the condition the funds be partly used to finance a massive campaign to end poverty, war and environmental destruction. For example, here is a picture of one of a set of 60 boxes each containing $125 billion worth of bonds: 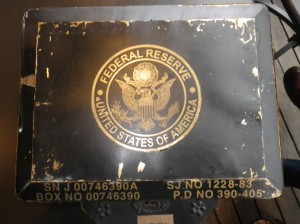 If the Federal Reserve Board and the BIS refuse to cash these historical bonds, then the relentless campaign against them will continue. This campaign has so far removed from power Pope Maledict, J. Rockefeller, Queen Beatrix of Holland, 26 top Pentagon generals, the CIA head Petraeus, Hillary Clinton, the King of Saudi Arabia and many others. Last week, in a major cabal defeat, Sabbatean mafia stooge Julia Gillard was removed from the Prime Minister’s office of Australia. Next will be anybody else who stands in the way of efforts to save the planet including Ben Bernanke and Barak Obama.

Prime Minister Kevin Rudd was removed from office 3 years ago immediately after he had agreed to use new energy technology to remove salt from sea water in order to turn the Australian desert green, according to MI6 and Australian Secret Intelligence Organization (ASIO) agents. The coup that removed him was arranged by Federal Reserve Board agents, the sources said. Immediately before he was removed, a warning of an impending nuclear terror attack against Japan was given to the Australian embassy in Tokyo to deliver to Kevin Rudd, ANSIO agents say. However, the embassy instead warned the Feds who initiated the move to ouster Rudd.

Australian military and security types are now going to insist that the murder in 1967 of Australian Prime Minister Harold Holt be properly investigated.

The trail will lead to Henry Kissinger, multiple sources say. From there the trail will go to the gangster families who own the Federal Reserve Board. In other words the investigative trail is grinding towards them on charges of both murder and the issuing of fraudulent bonds.
The bonds pictured above and below are

part of a batch of bonds given to a Chinese Nationalist army general by a US general back in the 1930’s. We have confirmed with a master list at the Federal Reserve Board that they are genuine. The Feds have been trying to buy up bonds like this for a tiny fraction of their cost and then dump them in the garbage. However, the owners of this batch are insisting on full payment and they have the means of enforcing their demands.

Here, printed on what looks like monopoly paper, are some genuine Fed million dollar bills: 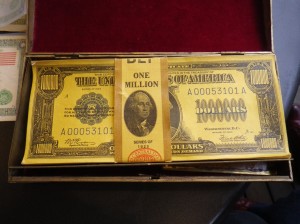 These are separate from the bonds in the boxes. They are part of vast mountain of such instruments the Feds spread around Asia without any intention of ever returning the gold and treasure they traded them for. 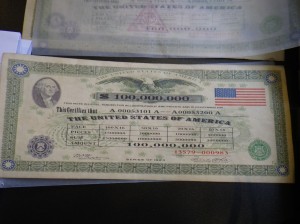 Both the Chinese Communist government in Beijing and the Nationalist government in Taiwan have countless trillions of dollars worth of these bonds. If they present a united front and force the Feds to pay money, the Feds can be driven out of business. The real question, of course, is what to do after the Feds are busted.

On this front, there are several different groups with competing agendas. One is the Neil Keenan group suing on behalf of the Dragon family. This lawsuit, if it is ever accepted by any court, would restore the rights to the traditional treasures of Asia to the old royal families of Asia, including the Qing dynasty heirs.

However, the Chinese Communist Party and some Asian secret societies do not want to turn the clock back 100 years and return to dynastic rule. Nor do many people in the West want to replace a secret Western family group with a secret Asian family group.

Another group, now going by the name One People’s Public Trust (OPPT)

has tried to take up the cause of the old Marion Horn Five Star Trust case to get their hands on the vast funds they believe will flow to the victors of the ongoing financial war. While the original Five Star Trust case seems to be legitimate, the OPPT is very opaque and many sources claim it is a cabal front. The OPPT is saying they will produce about 25 million millionaires if they win but they do not talk about what will happen to everybody else. Red flags are also raised by the involvement of Guy de Rothschild, of the French branch of that family, who was in on the 311 tsunami and nuclear terror attack on Japan. A representative of De Rothschild called last week and expressed surprise that Japan was doing just fine and that there was in fact no nuclear holocaust going on here.

Yet a third group claiming vast funds is the Casper group. They seem to represent groups with legitimate claims of having been ripped off by the Federal Reserve Board. This is definitely true in the case of the small farmers all over the USA who were conned out of their land by fraudulent bank deals.

They have support in the military but have not put forth a clear plan for what they want for the planet.
The US military is also up to its eyeballs in Iraqi Dinars. It is not a good idea to enrich the Bush crime family and reward them for their rape of Iraq by allowing them to cash in on all the Iraqi Dinars they stole. Any Dinar revaluation must not include that Bush/Carlyle crime syndicate.

A fourth group, the gnostic illuminati, for their part, are calling for a complete end to hereditary bloodline rule. One of their platforms is a 100% inheritance tax aimed at accomplishing this goal.
However, that will not go well with people who spent a lifetime paying down their mortgages and want to leave their house to the children who grew up in it.

So, how about giving the right to create money to everybody? The problem, of course, is that in such an event a trillion dollars would soon become the price of a single piece of bubble gum. Ultimately, internet based currency like Bitcoin may be one way to democratize the process of money creation without causing inflation.

However, the idea of a totally free market where everybody pursues their personal desires without worrying about the greater good, and money is just a commodity, is part of the reason the planet is in such trouble now.

The White Dragon Society, for its part, is proposing to carry out what it calls Operation Santa Claus, that is make everybody happy.

The idea would be to allow the traditional royal families of Asia to issue money based on their historical treasures. At the same time, the old Western bloodlines could, after the mass murderers are removed, also be allowed to issue money. However, in both cases the money would need to be spent in the real world carrying out big humanitarian or development projects. No more money games or “trading platforms” where trillions of dollars are created out of thin air and spent by cabalists on bribes, baubles and goons.

Also, under Operation Santa Claus, the bad people have to pay for their crimes meaning all the victims of Federal Reserve Board fraud, including US family farmers and Chinese merchants, would be compensated. At least one hundred years of organized fraud against the people of the world will need to be rectified once the Fed is busted.

Also, to make sure the average person on the street understands things have really changed, the WDS is proposing a jubilee. The idea is to eliminate, in a one off deal, all debts public and private. If you are paying a mortgage, you will no longer have to and the house will be yours. If you are renting an apartment, you will no longer have to pay rent and the apartment is yours. If you are an old lady living from rental income, the government will pay you the same amount you got from rent.

Of course, making this real means busting the Fed or forcing it to cough up the money. To bust it, of course, means we need to take these bonds to the Fed and insist that they cash them “or else.” Believe me, they do not want the “or else,” to happen.

The WDS has also long proposed creating a new meritocratically staffed agency charged with the job of ending poverty and stopping environmental destruction. It should have an annual budget of at least $1 trillion or 20 times more than the World Bank has.

Until this is made possible, the cabal will continue to be put under increasing pressure.