To understand what is going on now, look back at the fall of the Soviet Union. While in retrospect it seems like it happened overnight, at the time it seemed to take forever. First there were strikes at a Polish shipyard and other troubles that went on for months before suddenly the Polish Communist government fell. Then there was similar strife in Germany for what seemed like forever until, overnight, the Berlin wall fell. So it went in spurts and stops until the Soviet Union itself collapsed. The situation in the West is now similar; governments have fallen in Italy, Spain, Greece, Australia, Japan and elsewhere but the big Kahuna, the corporate government of the United States, is still standing. However, under the surface tension is building and something fundamental is about to give way, possibly in the autumn.

Take a look at the photograph below: 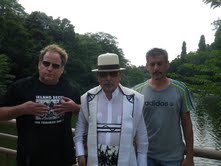 From left to right are Benjamin Fulford, spokesperson for the White Dragon Society, Chodoin Daikaku, liaison for the world’s martial art’s societies and “Alexander Romanov,” gnostic Illuminati Grandmaster. They posed for this picture last week after agreeing on a plan of action to save the world.

First of all, all the people studying martial arts around the world can be reached by analogue means via Chodoin’s network. His often controversial personal political views are irrelevant to this. What matters is the principle of martial arts to never strike the first blow but to defend yourself vigorously if you have been struck. That blow has been struck. It can now be proven beyond any doubt that a faction within the Western elite has been planning to murder 90% of humanity. This attack is still going on in the form of forced sterilization through vaccines, the release of bio-weapons, attempts to create mass starvation and multiple attempts to start a full scale nuclear war. In order to stop this, if it comes to that point where no other choice is possible, then the martial arts network can use non-digital communications to mobilize a 200 million person army.

Then there is the gnostic illuminati, represented here by Romanov. This group is opposed to rule by bloodlines and claims to have started the French, American and Russian revolutions. Each of these revolutions was characterized by the removal of bloodline rulers. They claim to have been behind the recent riots in places like Turkey and Brazil and also say they were behind the regime change that just took place in Egypt. They wish to end the control of the creation of dollars and euros, and thus the control of world power, by an in-bred, unelected family mafia.

Finally, there is the White Dragon Society. The WDS can only be used for the greater good and not for personal benefit. The WDS recognizes that a fascist coup d’etat in the West has turned Western civilization from something overall benevolent into something parasitical and murderous. It wishes to restore all that was good about Western civilization including democracy, the rule of law, respect for human rights, protection of nature, freedom of information and unhindered scientific progress.

The WDS works in partnership with Asian secret societies in a relationship based on equality, mutual respect and work towards win-win solutions.

All of these groups support the idea of a massive campaign to end poverty, stop environmental destruction and set humanity on a path to exponential expansion into the future.

To this end, these groups will politely but firmly ask the people currently in power in the West to offer their full cooperation or else stand aside and let us do the job.

In order to attain world peace, the planet still faces a few housekeeping problems. In Asia, a return to independence for Okinawa and a reunification of the Korean peninsula is expected to be a condition for lasting regional peace. In the Middle East, the rogue nation of Israel will have to cease its criminal and anti-social behavior. The ancient family feud that split Islam into Sunni and Shia sects will also have to be dealt with. These issues can all be dealt with without a need for war so long as the rest of the planet insists.

Then there is the problem of the rogue outfit, founded in 1871, known as the corporate government of the United States. Right now it is under a collective leadership arrangement using Barak Obama was its spokesperson. This group is also finally making the truth about Obama’s past public.

Also, something sent about Obama by an unknown author has been posted here:

The reason this criminal is still in power is that the military industrial complex uses him to symbolize the dictatorial powers that they have conveyed on their presidency. There is also the lack of a suitable alternative within the existing Washington D.C. power structure. The military industrial complex is nonetheless promising to work with the WDS as soon as it and its allies get control of the money printing presses. When this happens, all that was good about the Republic of the United States of America (as opposed to the fascist United States of America Corporation now in power) will be restored.

So, the Comittee of 300, the families that own the Federal Reserve Board, the unelected management of the United Nations and other leaders of the current governing structures have been put on notice.

They must hand over the process of creating and distributing dollars and Euros in a transparent and public manner to the people of the planet. They must also agree to mobilize existing government and corporate structures for a massive campaign to end poverty, end war and stop environmental destruction. In theory, they have already agreed to help attain these goals. In practice they are doing almost nothing. If negotiations fail over the summer, the autumn will be colored in red.