The Khazarian mafia is in a state of extreme panic following the death of their presidential hopeful Hillary Clinton on September 11th. Below is a screenshot of the ABC Television announcement of her death that was deleted from the internet. 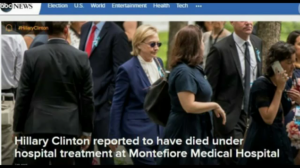 The dragnet is now closing in on Bill Clinton and the Clinton Foundation, Pentagon and agency sources say. Once that is exposed, the entire corrupt Washington DC establishment will crumble, the sources say.

This is what CIA sources say is planned next:

“We predicted Biden would be brought in 6+ months ago…Kaine, a disciple of the Central/ South American ‘liberation theologists’ will go along: one-term or less to Biden and the baton passed to Kaine ….this is the current plan, ready to be implemented.”

However, Pentagon sources say that on October 1st, immediately after the end of the US corporations’ fiscal year, a new gold backed currency and possibly an entirely unexpected new leader (possibly Canada’s Justin Trudeau), will be announced.

There will be high level negotiations between the Asians and the US military industrial complex this weekend to discuss these and other issues, White Dragon Society sources confirm.

The Khazarians, in full panic mode, are now using a computer graphics generated Hillary Clinton to create the impression that it is business as usual. To confirm this, please check the following video of Hillary that was broadcast after her “collapse” on September 11th. You can see the images on the smartphones being held up are entirely different from what is being shown on the stage (no Hillary, no flags). Also, if you go to the 20:15 mark, you can see her arm disappear, while Hillary herself vanishes at the 20:51 mark. See for yourself:

FULL: Hillary Clinton first speech since 9/11 spill – North Carolina
So you have a political establishment that is so corrupt and degenerate that it is now trying to elect a CG President. That is simply not going to be allowed to happen, Pentagon and agency sources affirm.

A Donald Trump presidency is also looking more problematic because the Chinese, the largest creditors for the bankrupt US Corporation, are against him.

In any case, the rest of the world has clearly already decided to bail out on the US corporate government. In the past year, foreign central banks have dumped $343 billion worth of US government bonds and the sell off is accelerating.

It is not surprising they refuse to invest in a government that admits $6.5 trillion went missing from its military budget in 2015 alone. Agency sources say the $6.5 trillion was laundered through the Clinton Foundation and spent on