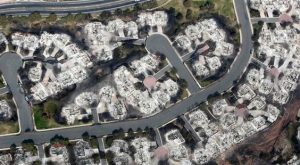 Dear Benjamin,
Here is a picture of the devastation of Waldo Canyon in Colorado in an incredible wild firestorm in 2012.  The reason I bring it up is because it’s the first time we see multitudes of houses burned and cars melted without touching the trees and grasses around the houses;  very close to the Santa Rosa fires of California recently.  At the time, everyone was remarking about melted cars but untouched trees.  First time ever.  I suggest it was the first time DEW weapons were turned onto the U.S. and her people.

More investigation into the two fires has to be done, I realize, but now that many are coming up with pictures of the laser beams hitting in the Santa Rosa area, maybe there were folks who got the same types of pictures for the Waldo Canyon fires without realizing what they were looking at, as it was the first time.  I just wanted to point out the similarities and my suspicions, even in 2012 when I saw these pictures.  Thanks for your time.