In what future historians will look back on as a huge watershed event, the P2 Freemasons—worshipers of the Black Sun and creators of both fascism and communism—are suing for peace, White Dragon Society sources say.  This, coming with the removal of the Rothschild family from control of central banks, means the world is about to enter uncharted historical waters.

The P2 Freemasons are proposing that the world “be led by a triumvirate of the sons of the Black Sun, the sons of big Horus, and sons of the Dragon,” according to the proposal conveyed by Vincenzo Mazzara, a cavalier of the Teutonic Knights and the most senior P2 member to contact the WDS.

At this point, most readers are probably, and rightly so, appalled at the idea of three secret societies colluding in order to continue to rule in secret.  The WDS, of course, wants everything to be open and with full public participation.  Nonetheless, the P2 are powerful;  they told us in advance they were going to fire Pope “Maledict” (Benedict XVI) and they did so.  The P2 also bragged to the WDS that they were the ones responsible for staging the March 11, 2011 Fukushima tsunami and nuclear mass-murder terror incident.  Thus, the fact that they are now suing for peace means they know the dragnet is finally closing in on them.

This move is also intimately related to the announcement that Nazi Fourth Reich Fuhrer George H.W. Scherff (Bush) is dead.  As Pentagon sources put it, “While the G20 was prepping the world for a global currency reset, 41st President Bush Sr. expired on 11/30 because 11+30=41.”  In fact, Bush Sr. died in June, but the announcement was delayed until all the preparations were made to arrest senior Nazionist (Khazarian mafia) underlings like Hillary Clinton and Barack Obama, the sources say.

This is why U.S. President Donald Trump retweeted this famous image on November 27th with the label, “Now that Russia collusion is a proven lie, when do the trials for treason begin?” 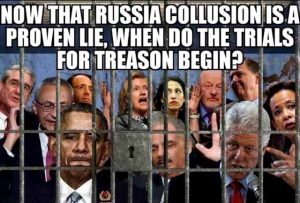 The answer to that question, Pentagon sources say is that …