I’m writing to you because we don’t know where else to raise our concerns and ask for Protection and Intervention.  We have reasons to believe that the Deep State / Cabal is planning to exterminate us on or after March 21, 2019.  They are going to try to cause enough unrest in the country to call a state of emergency (where we will be picked up and disappeared) and/or start a civil war here in South Africa.

They will use a False Khoi-San King by the name of Calvin Cornelius who fraudulently pretends to be the King of all the Khoisand people.  He is stealing the identity of the man in the picture below, King Abraham January, the Legitimate King of the Korana Tribe, as we have five recognized Tribes and each Tribe has its own King. 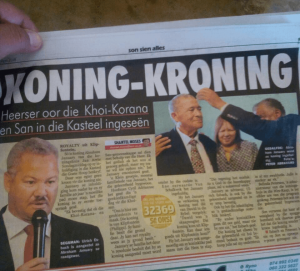 King Abraham has all the documents to prove his legitimacy, of land ownership, letters from Queen Victoria, and proof and photographs of his Great Grandfather, also known as King Abraham January and King of the Korana Tribe, who passed away in 1845.  This poor man doesn’t get anyone to assist him financially or in anything, and we fear for his safety because the false leaders want to silence him and all of us permanently.

The False King, Goab Khoebaha Calvin Cornelius 3rd, took the South African Government to Court (see below).  They are trying to re-create the German Nazi concentration camp methods, by threatening people who didn’t register with his “new country” and don’t have the necessary paperwork, to be arrested.  Calvin Cornelius gave some cryptic messages of Ezekiel 40:1, where it speaks about 25 years of captivity (2019 – 1994 = 25 years after Mandela and the ANC political party took over the country).  It also speaks about a city that was smitten.  Then one reads about burned offerings. 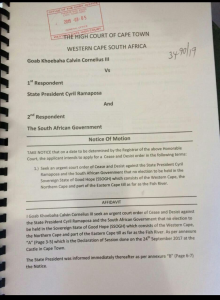 It becomes clear that the Deep State has now decided to part ways with the ANC Government and they are trying to put two radical factions in place;  namely, Calvin Cornelius for the Khoi and San people, and/or Julius Malema of the radical EFF political party who wants to confiscate all land from the people and put it in the hands of the state, because he believes he is going the win the elections on May 8, 2019.  The current State can’t even run a state-owned enterprise (see the Zondo Commission on State Capture) on behalf of the black majority.

The Deep State does not want a peace-loving King like King Abraham January in place.  They are planning a civil war (see link below).  One of our Khoi-San leaders attended a meeting he was not supposed to be at and discovered how the white leaders and the black leadership were dividing the land amongst themselves (behind closed doors) without any Khoi or San leadership participating in these decisions.  Could this meeting be about the allocation of land after their created civil war (the spoils of war)?

Who is running South Africa?  We discovered in your article dated 2019/03/06, it was mentioned about the cabal family named the Farnese who built their first Pentagon in Caprarola near Rome in 1540.  I believe that they control the Oppenheimer and Rupert families that are currently controlling South Africa.  We believe we have evidence of their second Pentagon being established in Cape Town, South Africa in 1666 by Jan Van Riebeeck.  This means that the Pentagon in the USA is their third. 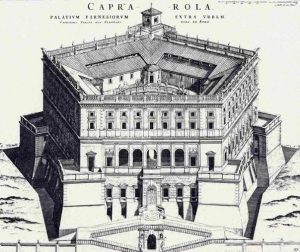 This one was built in South Africa 126 years after their one in Italy: 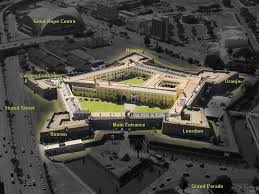 It also comes as no surprise that in 1666, in London, during the Black Plague and great fire of London, the Parliament enacted an act behind closed doors called “The Cestui Que Vie Act 1666,” where everyone (i.e., we the sheeple) was declared dead and their properties taken.

We hope you will be able to guide us to channels who can intervene and save our people and country from these mass murderers.  Much appreciated.

RH:
Okay, let us start by publishing your letter.  Publicity always hurts these criminals because the light of truth is their worst enemy.
—BF