“I am sending you a photo of the Polish newspaper “Tylko Polska” (Poland Only) where they printed selected parts of our interview, mostly about depopulation plans, Angela Merkel, Donald Tusk, Nazis, etc.” 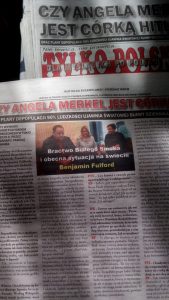 Many thanks for allowing us to record the interview with you.  It was published on PorozmawiajmyTV portal and it is highly prized among Polish viewers, especially awakened ones.

They plan to add English subtitles, but due to te technical problems their translator is having, it was delayed.

Your comment about Polish ex-PM Donald Tusk raised the attention of Robert Majka, independent MP, and he would like raise this issue in the parliament (Sejm).  He is asking if it would be possible for you to provide any documents/copies or any material on it so he can present it in the Parliament and suggest there to start legal action against Donald Tusk.

As you can see, your great work is having an impact on the world!  We are very grateful for what you do and we are looking forward to more interactions with you.

All the best!
—HK