While only a few die-hard corporate propaganda Kool-Aid drinkers actually believe the U.S. announcement that “master terrorist al-Baghdadi” was killed yet again, this time it actually means something, Pentagon sources say.  The third announcement of his death means that U.S. President Donald Trump “is poised with Russian help to cut off illegal oil, arms, human, and drug trafficking that benefit Zionists, the CIA, and the deep state,” they explain.
https://www.veteranstoday.com/2015/04/27/isis-leader-al-baghdadi-dies-in-israeli-hospital/

Basically, now that the pretense of fighting ISIS or Al Qaeda or whatever brand name they used has blown up, Trump is now openly telling the truth—that the wars in the Middle East are about stealing oil.  The fact that Trump mentions Rockefeller-controlled Exxon Mobil by name as the company that can develop the Syrian oil fields also means Trump is now an official spokesperson for big oil.
https://lawandcrime.com/crazy/trumps-plan-to-take-syrian-oil-slammed-as-clear-violation-of-international-law-and-imperial-looting/

In any case, Gordon Duff of Veteran’s Today, who has better Middle East sources than this writer, says Mossad agent Shimon Elliot, aka “al-Baghdadi,” is actually still alive.  You can read his excellent report here:
https://www.veteranstoday.com/2019/10/27/exclusive-russia-says-bagdadi-killing-faked-by-us-part-of-new-move-against-the-region-by-deep-state/

Presumably he is enjoying his official death in a safe house along with his Mossad buddy Jeffrey Epstein.

This picture of CIA agent Tim Osman, aka “Bin Laden,” with his handlers sent to us by the Germans supports what Duff reports. 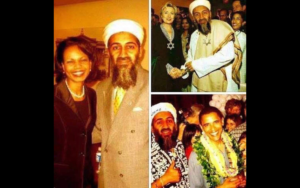 While we cannot confirm if these pictures are genuine, the story they convey has been confirmed to us by multiple sources over the years.

Meanwhile, in a sign the undeclared civil war in the U.S. is reaching a crescendo, the list of missing politicians in Washington, DC keeps growing.  Neither House Speaker Nancy Pelosi nor House Intelligence Committee head Adam Schiff have appeared in public since their sudden trip to Jordan last week.

House Republican Whip Steve Scalise tried to keep up pretense with this widely quoted tweet:  “My colleagues & I went to confront Schiff face-to-face in his locked room in the Capitol basement to see what he’s been hiding.  When we got there he immediately shut down the hearing & fled with the witness.”
https://twitter.com/SteveScalise/status/1187100490888335360?ref_src=twsrc%5Etfw%3EOctober

However, a colleague in Washington, DC with a press pass says Pelosi, Schiff, and many others have not been seen in public during the past week and no new videos of them have emerged, either.  Former CIA chief John Brennan, who was constantly in the media, has also not been seen in public for two weeks, the journalist also noted.  (Note to computer graphic agents:  Time to get to work.)

Also, the fact that corporate media reports concerning the ongoing “Ukraine” impeachment proceedings against Trump now quote politicians other than Schiff or Pelosi lends credibility to the idea that they are gone.

Pentagon sources explain, “As sealed indictments reach 130,000, many notables may choose death over dishonor, Gitmo, or military tribunals, and they may be given the …