The Nazi Dutch Royal Family and Dutch Prime Minister Mark Rutte may have been executed, according to Pentagon sources.  This information has not been independently verified at the time this report went live.  However, the sources have been reliable in the past.  This was the message we received:

“The Dutch pedo cabal led by Queen Beatrix, the Royals, and PM Mark Rutte may have already been terminated by U.S. troops.”

This was done to “to stop African immigration, expose MH17, and crimes against humanity.”   The sources add the European Union capital of Brussels is under U.S. military occupation to purge the EU Deep State.

The military occupation of Belgium and Holland and the execution of their elite class are long overdue.  This is true not just in Belgium and Holland, but also in the U.S., England, and Canada, etc.  These are people who have been torturing and murdering children on an industrial scale for millennia.

Have trouble believing that?   Then check out the case of Marc Dutroux in Belgium that has been proven true by multiple court cases. https://en.wikipedia.org/wiki/Marc_Dutroux

Here is a brief summary that was taken from an article about this, which can be found at the following link: https://cwasu.org/wp-content/uploads/2016/07/Confronting-An-Atrocity.pdf?fbclid=IwAR1iFppDKV9fKTovmv9zLfWBQduNSavsSNA4_4fuavxF6Y5u0n8tB7JfI60

”Dutroux was twice convicted of kidnapping and raping underage children. The first time was in 1989. The second time occurred in 1996. He served only 3 and a half years of his first 13-year sentence and less than 10 years later, he was convicted of kidnapping, torturing, and abusing victims, some of them to the point of death.

And sometimes they requested he film certain influential people engaged in these acts, for later use as blackmail.

He claimed many of his customers and financiers were world leaders. This was not a stretch of the imagination because he lived in Belgium, where the EU and NATO headquarters were located.

During his trial witnesses and victims would soon come forward, describing such things as “Black Masses,” with child and adult sacrifices taking place in front of observers and participants, which included prominent politicians and figures.

They also described “hunting parties” where elites would release naked children into the woods to hide, so that the elites themselves could hunt them down and slaughter them. Many of the stories from victims contained so many similarities they were impossible to deny. For example, the hunting parties were often held at castles, where victims could not escape and were hidden from the public eye. Those not killed in the hunt were usually chased down and mauled/killed by Dobermans.”

Meanwhile, in New York, a child torture and adrenochrome harvesting facility at 720 Fifth Avenue, was busted and hundreds of tortured children were rescued, according to Pentagon sources.  This is just up the street from Jared Kushner’s 666 5th Avenue mark of the beast injectable microchip factory. Note that the original address on company documents has been changed to 725 Fifth Avenue, which is Trump’s building, to divert suspicion.

The kids at this facility were kept from ages as young as 3 and repeatedly tortured and raped in order to harvest adrenochrome.  They were killed once they reached puberty.  The entrance to this facility was disguised as an “Abercrombie and Fitch Kids,” store as a cover for children being brought in. 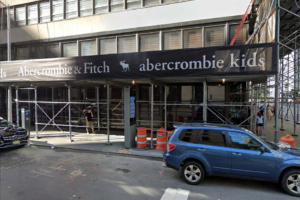 The fact that Google, Facebook, etc., won’t link to this speaks volumes about who really controls these corporations. Rest assured the leadership of these companies will be rounded up soon if it has not already happened.

The ongoing takedown of this Satanic Cabal has led to some serious intrigue at the Vatican involving Pope Francis and U.S. Secretary of State Mike Pompeo among others.

According to P3 Freemason sources, Pompeo was trying to order the pope to…