The coming week is expected to be historic as opposing forces will have a showdown in Washington DC on January 6th.  The outcome will determine the survival of the Constitutional Republic with Donald Trump finding his place in history as one of its great heroes.   It may also signal the start of the endgame that will ultimately make him the last president of the United States Corporation.

The additional powers afforded him in the current state of emergency will allow the playing of multiple “Trump cards” to round up 220,000 or so Satanists who surreptitiously seized control of the U.S.   They will likely be put into FEMA camps and Nuremberg type war crimes tribunals will begin.  Trump will be known as a liberator of humanity.

The Ayatollah Khameini has publicly said Trump will be killed and now this website, linked to British intelligence, has put out the following photograph: 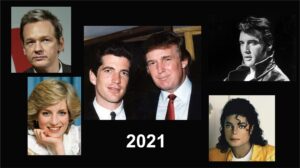 It shows Trump surrounded by famous dead people with the caption 2021.  Do these people have some inside knowledge?

If – as the photograph implies – he is to be killed in an accident like JFK Jr. or Princess Diana, then such an execution would definitely usher in a bloodbath and mayhem.

In any case, Pentagon sources say that if Trump is killed or if the Congress and Senate vote to support the fraudulent election of Joe Biden, then “the people will begin killing politicians and judges as well as corporate executives, vaccine pushers, lockdown promoters, etc.”

The situation inside the military is such that the colonels and non-commissioned officers are ready to take action into their own hands if the generals comply with the obvious election theft.

Some NSA sources think we are dealing with a bifurcation of reality.  This could be a metaphor for different visions of the world or it could be real.

Looking back on 2020 we can see how Trump was backed into a corner by the Deep State as a result of the global fake pandemic.   They planned to shutdown economies in preparation for a financial reset of the central bank fiat money system.

As a countermeasure – after initial proposals for the use of preventatives like hydroxychloroquine were blocked by Deep State actors – he has been pushing hard for the early release of vaccines to remove public fear and allow the economy to fully reopen.  The US farm is home to many sheeple who have been programmed over a lifetime to have faith in vaccines without knowing the harmful contents.   Even without adequate safety testing, they will line up for “mark of the beast” ID vaccine tattoos that will change their DNA in unpredictable ways.

Given limited alternatives during an election year, Trump perhaps realized vaccines are a necessary evil for adequate public support to stay in power for another 4 years while removing the fear that is crippling people psychologically, and in turn the country economically.   He may see it as a tradeoff to allow people to return to work and businesses to reopen versus debt and despair leading to suicide and social unrest, with ultimately a greater loss of life.

The Deep State likely never expected Trump could get a vaccine out so quickly to counter their pandemic lockdown economic collapse strategy absent major war efforts he derailed and conclusion of Middle East peace agreements.

Now he is exposing the incompetent state politicians who can’t get their act together to distribute vaccines even when they have been delivered.  This was also evident with the production of ventilators that were demanded by psychopaths like Cuomo in NY and then never used.

Trump may be playing 5d chess by distributing the vaccines in order to flush out and eliminate the entire network of Satanic vaccine pushers as evident in his own tweets.

At the same time, Trump is exposing the fraud where any death, no matter how unrelated, is being used to inflate the Covid numbers and collect huge payments of $13k for admission, plus $39k for use of a ventilator.

On the topic of disinfo the P3 Freemasons sent us a photograph “provided by the Russians,” which they claim is of the microchip inside the Pfizer vaccine.

Russian FSB sources when contacted for confirmation said the microchip was…