It’s over folks, the criminal enterprise known as the Corporation of the United States of America is finished.  Actual on the ground reporters with White House Press passes, confirm that nobody is in the White House.  The corrupt members of Congress and the Senate dare not show their faces in Washington DC, knowing they could be arrested if they do so. https://www.washingtontimes.com/news/2021/jan/21/house-cancels-business-during-first-full-biden-wee/

Here is a picture of the oval office sound stage where they are shooting the so-called “President” Biden using Hollywood FX. 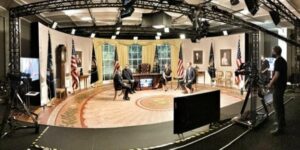 This is always another option. https://www.bbc.com/news/uk-england-norfolk-55469093

Different uniforms were used for the fake inauguration of Biden.  One source on location says actors were hired. 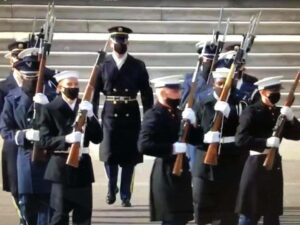 Now compare with the inauguration of George Bush Jr.  The uniforms all have insignia. 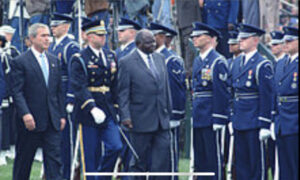 There is plenty of other evidence out there, such as photos of a parking lot behind the “Oval Office,” when the real one would have a lawn in the background.

Thief in Chief Biden and team were denied the use of a government plane and had to fly on a private jet, illustrating how he is an illegitimate president.

Pentagon sources say we are now in an interregnum before a Republic of the United States of America is established.  Eventually, potentially from Alaska to Argentina they suggest.  A new capital will be built, and Washington DC will become a museum and tourist attraction, the sources say.

Remember, the Republic of the United States of America founded in 1776 was replaced by a privately owned corporation in 1871.  That corporation’s shelf life has now expired.

However, the owners of the Corporation: the Rockefeller and Rothschild, etc. crime families are still fighting tooth and nail to keep their illusion of control intact.  They have reached a deal with Communist China to finance their corporation and have been blackmailing the U.S. military with nuclear dirty bombs.

That is why their sh-t-show is still on many television sets.  As further evidence the Rockefellers are trying to sell us out to China, take a look at the CCP flunky they want to run the CIA: https://thenationalpulse.com/exclusive/biden-cia-director-ccp/

However, Pentagon, British MI6 and Russian FSB sources say a counter-attack is underway that will end their entire fake pandemic and related attempt at establishing totalitarian rule.  Russian FSB sources promise “the global trend is to stop the pandemic hysteria by May.”  Of course, we have seen so many deadlines come and go with no visible change happening that we will only believe this when we see it.

Nonetheless, the reason the Russians say it will be over by May is because – although the information has been carefully scrubbed from the English language internet – the fact is that in 2020 global mortality statistics show no increase.  In other words, the objective facts show the entire pandemic is fake.

The article at the link below in Russian has English charts showing these statistics.  Please use Google translate or something similar to read the text.  https://hippy-end.livejournal.com/3918359.html

Furthermore, shocking revelations about the real reason for the ongoing mRNA vaccination campaign have motivated world special forces to intensify the hunt and kill operation against the Khazarian Mafia politburo and their flunkies.  This means, for example, the entire extended Rockefeller family is being rounded up.

Here is proof of Rockefeller guilt from a document their foundation produced in May of 2010:

“In 2021, the pandemic that the world had been anticipating for years finally hit.  Unlike 2009’s H1N1, this new influenza strain — originating from wild geese — was extremely virulent and deadly.  Even the most pandemic-prepared nations were quickly overwhelmed when the virus streaked around the world, infecting nearly 20 percent of the global population and killing 8 million in just seven months, the majority of them healthy young adults.

The pandemic also had a deadly effect on economies: international mobility of both people and goods screeched to a halt, debilitating industries like tourism and breaking global supply chains.  Even locally, normally bustling shops and office buildings sat empty for months, devoid of both employees and customers.

The pandemic blanketed the planet — though disproportionate numbers died in Africa, Southeast Asia, and Central America, where the virus spread like wildfire in the absence of official containment protocols.  But even in developed countries, containment was a challenge.

The United States’s initial policy of “strongly discouraging” citizens from flying proved deadly in its leniency, accelerating the spread of the virus not just within the U.S.  but across borders.  However, a few countries did fare better — China in particular.

The Chinese government’s quick imposition and enforcement of mandatory quarantine for all citizens, as well as its instant and near-hermetic sealing off of all borders, saved millions of lives, stopping the spread of the virus far earlier than in other countries and enabling a swifter post-pandemic recovery…

By 2025, people seemed to be growing weary of so much top-down control and letting leaders and authorities make choices for them.”  https://thewatchtowers.org/wp-content/uploads/2020/04/Rockefeller-Foundation.pdf

Even worse, the vaccines they are now trying to inject into everybody on Earth are using CRISPR gene-editing technology to alter people’s DNA and brain structure in order to…