The city of Jerusalem will be “utterly obliterated” unless the Khazarian Mafia surrenders, according to a Gnostic Illuminati source.  The destruction of that city is needed to “put an end to messianic delusions” held by religious fanatics including U.S. President Donald Trump’s son-in-law Jared Kushner, the source says.

Any move against Jerusalem would be part of a massive worldwide counter-attack against the Khazarians following their recent offensive actions against Russia, the UK, the United States, Japan, and other countries, multiple intelligence agency sources agree.

As a part of this offensive, the U.S. and Japanese military are ready to respond because the recent attack on their forces near Mt. Fuji (fire at base of mountain on left side) has been traced to that city.  This is in part because Kiyosu Takayama, a self-declared Knight’s Templar, has been traced as the source of disinformation about the February 3rdattack.  He claims that in the attack the “U.S. Navy destroyed the world’s largest adrenochrome factory.” https://blog.goo.ne.jp/mokushiroku666/e/d9ea9ad13066e7c7077c58932514feff 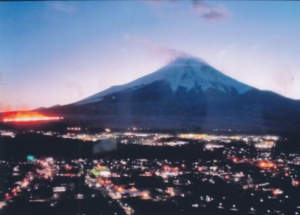 In fact, according to an official in the Pentagon’s Space Command:

“The Mt.Fuji fire was caused by a directed energy weapon very similar to what was used 2+ years ago in Paradise, California.  It was a warning by the dark forces to the U.S. and Japanese military forces conducting joint exercises in the area.  The very top brass in both countries knows what it was.  There is a gag order in place.  The Chinese Communist Party was involved.  The 7.1 magnitude earthquake off the coast of Fukushima on February 13th was done with a DE weapon as well.  The dark side is throwing everything they have at Japan to stop them from breaking free from the Khazarian cabal.”

The fact that this message appeared on the Telegram messenger service on my iPhone, but not on the same application on my Windows PC, indicates that Bill Gates et al, –including the Rockefeller family– were involved in the attack and subsequent attempt at misdirection.

In any case, Takayama’s source in turn was a senior Mossad agent in Tokyo who reports ultimately to the Duke of St Petersburg, according to the NSA.  We are now trying to find out who currently holds that title but apparently it is no longer held by a British Royal family member, the sources say.

Russian FSB sources for their part directed our attention to the following video showing then U.S. Secretary of State Mike Pompeo standing in front of a model of the Third Temple to be built in Jerusalem that does not contain the Al Aqsa Mosque. (minute 1:01): https://twitter.com/SecPompeo/status/1109083029430067200?ref_src=twsrc%5Etfw

The sources also say the link below shows a “photo of the Super Intellect Logos, in the underground Synagogue 3 Temple in Jerusalem.  Super Intellect is a golden shell was dug up in Karabakh.” https://sputniknews.com/world/201903231073479183-mike-pompeo-jerusalem-third-temple-model/

Whatever this item may or may not be; what people need to understand is that these messianic fanatics want to build a temple of death where living beings will be murdered as offerings to Molech, Ba’al, Set aka Satan.

The White Dragon Society and its allies will support the creation of a third temple when this war ends but it will be a temple of life, not death.  Here offerings will consist of pledges to promote life,  i.e. like environmental protection of vulnerable species that will support Earth’s biodiversity not destroy it.

In any case, the civil war raging in the west involving these fanatics has now pitted MI5 again MI6, and the CIA against the FBI among others.

In the UK, after MI6 triggered Article 5 of The United Nations Universal Declaration on Human Rights in both Great Britain and Ireland the head of Britain’s Armed Forces, General Sir Nick Carter took the side of…