The West is losing the war for Planet Earth because it no longer represents good and currently has incompetent criminal leadership.  The West many of us grew up in represented democracy, human rights, wealth, and progress.  It now represents disease, economic inequality, war, and fascism.

A poll sponsored by NATO of 53,000 people in 53 countries shows that 44% of people around the world consider the United States to be a threat to their democracy.  This compares to a figure of 38% and 28% respectively for China and Russia. https://www.rt.com/news/522986-world-fears-us-influence-democracy/

That means the U.S. is losing ground in the soft power struggle with Asia.

Also, with record trade and fiscal deficits as well as looming hyperinflation, the West is also losing the economic war.  In March, the U.S. posted its largest trade deficit in history at $74.4 billion, up from the previous record of $71.1 billion set a month earlier.  This is only possible for the U.S. by becoming ever more indebted to China.

China’s GDP in real world-based Purchasing Power Parity is $27 trillion compared to $20 trillion for the U.S.  With Chinese economic growth far surpassing that of the U.S. this gap will only continue to widen and will not change unless the West changes its system of economic management.

The only thing the U.S. has left is military power, and war game after war game shows it losing in an all-out war against China.

Unless the West restores real democracy, the rule of law, respect for human rights, and competent economic management, the next generation will become Chinese slaves.

The reason for this decline is that the West has been taken over by a Satanic cult.

In Japan, they have murdered prime minister after prime minister and many others in the post-war era to try to bring this country under the control of the same cult.  The process is easier to understand here because it has begun relatively recently.  However, in the West, it started at least with the murder of Jesus Christ by this same cult.  In the U.S. they murdered Abraham Lincoln, President Franklin Roosevelt, General George Patten, President John F. Kennedy, Martin Luther King, and many others to cement their control.

This group is now pushing the pandemic and the related totalitarian rule.  Take a look at the satanic family history of chief U.S. vaccine and pandemic pusher Anthony Fauci and his family crest. 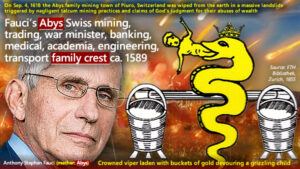 Their castle headquarters is only 15 miles from the Davos World Forum that is pushing for universal human vaccination, with God knows what synthetic programmed poison, using a manufactured pandemic as an excuse. https://americans4innovation.blogspot.com/2021/04/anthony-fauci-chief-globalist-snake-oil.html

Now take a look at this video of pandemic pusher Davos frontman Klaus Schwab, chief promoter of the pandemic and the “great reset,” telling Swiss television in 2016 that all humans will have a microchip embedded in either their brain or under their skin to attach them to a centralized computer network. https://www.youtube.com/watch?v=UmQNA0HL1pw&t=145s

According to Polish Intelligence, Klaus Schwab has a meeting set for July with power elites where they will discuss a mandatory ID for everyone.  Sources there say:

“This will not only control their access to money but also their access to a totally censored internet.  The elites are in a panic and are pushing their plans forward because too many people have become aware of their existence and have begun to rebel.”

Also last week a strong push by the White Dragon Society and their allies to set up a meritocracy-based planning organization, to help navigate humanity toward a better future, has flushed out a powerful and ancient secret society straight from a Dan Brown novel.  This society contacted us after we approached the BIS, the central bank of central banks in Switzerland. This is the legendary…