The Khazarian Mafia tried on the Satanic day of June 6th (66) to overturn a grassroots movement to remove the fraudulently installed Joe Biden presidency.  Following Donald Trump’s live GOP speech in North Carolina the day before where he claimed the fraudulent election was “the crime of the century,” the MSM tried to portray him as broken and incapacitated.  By infuriating Trump supporters, it has had the opposite effect.  This means the war to hunt down and kill all members of this cabal has intensified, MI6, CIA, and Pentagon sources agree.

The Trump on display was the real one, and not his loose jowled body double, NSA sources confirm.  The democratically elected president of the United States may be considering military action against the illegal Biden regime as the only option left.

Trump tried to assuage supporters by hinting at running in 2024.  He had also raised attention with comments about returning to the White House sooner than people expect and responded to interview questions about the “interesting” idea of joining the 2022 house race to become the speaker and impeach Biden.  The cabal seems to be hoping any delay will give them time to permanently cement their satanic grip on the U.S.  A growing body of evidence shows they intend to accomplish this by murdering most Americans with toxic vaccines.

This has been confirmed by a whistleblower from Pfizer who contacted 5 eyes intelligence last week and described the detailed manner in which their vaccine is designed to kill people.

“A peer reviewed clinical study from inside Pfizer raises serious concerns about the distribution throughout the body and the accumulation in multiple organs and the brain of the spike proteins created by the mRNA inoculations.  The inoculation goes to the deltoid [arm] muscle to then be expelled by the local lymphatic system.

The lymphatic system then spreads the residual (the so-called spike protein) to the lungs, liver, heart and brain.  It is very highly toxic and is expected to cause widespread causality and death.  The paper is expansive and highly detailed and technical.  It would require an expert eye, which may well challenge everything we know to date.”

“This is actionable military shoot to kill intelligence,” said an MI6 source, “Already seven death warrants have been signed and this is only the beginning.”

“We have been watching you for years, at first we dismissed you as a conspiracy theorist but now we have the forensics to back your claim there is an element [in the ruling class] who is genocidal,” MI6 told this writer.

The forensic evidence points to the Sovereign Military Order of Malta, as is the enforcement arm of this genocide.  Remember these logos of the murderous umbrella corporation, the Rothschild front company in Shanghai, and their resemblance to the Maltese cross? 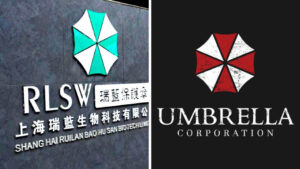 Breakaway members of the Knights of Malta confirm the SMOM is committing mass murder.  In other words, the following individuals need to be hunted down and killed or taken in for interrogation if possible:  https://www.orderofmalta.int/government/sovereign-council/

Remember these are the people who replaced Pope Francis with a mask-wearing impostor who is calling for every human on Earth to be vaccinated.  This call is going out despite multiple whistleblowers coming forth and warning that mRNA vaccines are dangerous.  They are also pushing these vaccines even though freedom of information requests sent to 60 relevant government and international agencies, including the CDC, the WHO, and Health Canada reveals none of them has proof that COVID 19, the reason for the vaccines, even exists.

Military authorities have concluded, “The various civilian governments are showing astonishing naivety in this entire affair and we strongly suspect many are under compromise and control duress or the recipients of inducements.”  In other words, they are being bribed, blackmailed, or threatened.

“It is like pulling teeth trying to get rid of these governments.  They initially do not care they are committing high treason.  The people running the world’s civilian governments need to be dragged into the streets and shot,” the sources add.

Nonetheless, the military and information campaign against the pandemic vaccine pushers is being won.  The revelations about Anthony Fauci financing the creation of pandemic-causing viruses are now being repeated throughout the information ecosphere.

Fauci, Bill Gates, Klaus Schwab, and many other criminals behind this scheme have already been arrested and or executed, CIA, Mossad, MI6, and Pentagon sources all say.

According to agency sources, death warrants have also been signed for the following individuals: