A fundamental sea change has taken place at the highest levels of world power on or around June 21st, 2021.  The world’s military and intelligence agencies have decided to treat the ongoing fake pandemic medical emergency as an act of war and react accordingly.  To quote from MI6:

“We know the whole Covid thing is a scam, a lie, a money-making con.  Civilians who conducted an undeclared act of war have now been well and truly found out.  That allows us with military legal to actually deal with these people.”

Mossad sources for their part report:

“There is a clean-up operation taking place of the Octagon group in Switzerland. Since Yossi Cohen the Head of the Mossad stepped down as of June 1, Octagon has no more protection from the Mossad. David Barnea the new Mossad Chief, has been ordered to stand down.”

As a part of this, a death warrant has been issued for David Rockefeller Jr.  He is pictured below with his slaves Tokyo Governor Koike Yuriko and Akie Abe the wife of former Japanese slave prime minister Shinzo Abe (we are not sure who the woman at the far left of the picture is). 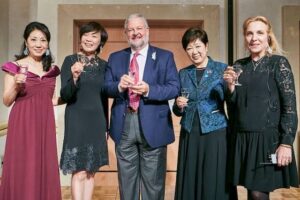 It is well-documented history that the Rockefeller family took over Western medicine by setting up and financing medical associations.  These suppressed traditional natural-based medicine in favor of petroleum and chemical-based medicine.  Since Western medicine has long been structured as a military organization headed by “surgeon generals,” it was easy to co-opt this system by taking control of its command structure.  This is the WHO, the various medical associations, and assorted “surgeon generals.”  Any doctor who dissents from this command structure will have their medical “license,” removed and lose their access to a lucrative salary.

Since Rockefeller Jr. is ultimately responsible for the “pandemic” and the resultant campaign to vaccinate all humans with toxins this makes him one of the worst mass murderers in human history.

Rockefeller has been fingered by former Israeli Prime Minister Benjamin Netanyahu (who is now in protective custody) as the most senior member of the genocidal Octagon group.  For this reason, a warning is being sent to the Swiss, to either hand him over for questioning or face the complete destruction of Octagon group headquarters near Lake Geneva.

Rockefeller Jr. inherited not only control of the medical associations from David Rockefeller Sr., but also control of much of the so-called G7 power structure including most of the Fortune 500 corporations.  This is what they refer to as the “[Rockefeller] rules-based world order.”

The ongoing attempt by these corporation-owning families to turn Planet Earth into a giant animal farm is what the world’s military organizations have decided to fight against.  The chart linked below illustrates the effects of fascism, i.e. when corporations take over government. https://cms.zerohedge.com/s3/files/inline-images/wage%20share%20US.jpg?itok=KX8Kb1_h

Basically it turns the power structure into a giant vacuum cleaner that sucks the wealth from ordinary people and other living creatures into a giant black hole of oligarchy.