The takedown of the Khazarian mafia is accelerating. A worldwide arrest warrant issued for David Rockefeller Jr. means one of their top bosses is now a hunted man. Meanwhile, riots and demonstrations around the Western world are bringing down other KM leaders like Emmanuelle Macron of France and Justin Castro of Canada. Already, the Rothschild clan has admitted defeat and is now under the leadership of Nathaniel Rothschild. He promises that from now on his clan will stick to business and stay out of geopolitics. Here is a link to his company Volex. https://www.volex.com/

The defeat of the very top levels of the KM is leading to historical changes around the world. This includes the demise of the UN, the rebirth of the United States and the start of a new age for the planet earth. The overall story is the end of millennia of rule by a Satanic cult.

Since so many people are now waking up, it is time to once again put out background information about who the revolution is against. Barry Chamish, a Jew who lost a third of his family to the holocaust, outlines the real history of the Sabbatean/Frankist cult (the people I call the Khazarian Mafia). He notes, for example, that “At the 1936 world Zionist conference Chaim Weizmann said ‘Perhaps only 2 million will survive the upcoming holocaust but they will be ready for life in Palestine.’”

If this is news to you, I strongly recommend you take 40 minutes of your time to watch the video he was killed for recording. It will tell you all about the links between 666, the Illuminati, Zionism, the Rothschilds etc. He points out very clearly these people are not Jews.

However, Chamish only traces the problem back to 1666 and fails to realize we are dealing with an ancient cult of human slavers known as the Hyksos who worship a goat-faced god with a forked tail that we know of as Satan. A holocaust is a burnt offering to Satan. The Jews have been their slaves for thousands of years.

This writer only learned about these people when they invited me to join them and offered great wealth and power as long as I agreed to participate in their plot to kill 90% of humanity and enslave the rest. I have been fighting them ever since.

The ongoing fake pandemic and very real vaccine mass murder campaign is just the latest attempt by these Satanists to murder enough people so that they can stay in power and enslave humanity. 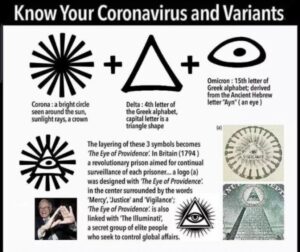 At the four-minute mark of the expert testimony linked below, you can confirm the spike protein in the toxic vaccine batches is race-specific and Ashkenazi Jews are immune.

Two different Mossad sources say that almost all of the Israelis are given the saline solution, number 01 vaccine. And yet, even though Israel is one of the most highly vaccinated countries on earth, they have one of the highest COVID death rates. What is happening is that the KM are using vaccines to kill dissidents among their Jewish slaves. In other words, obedient sheeple are given placebos while troublesome ones are given lethal injections.

The worlds’ military and intelligence agencies are in the midst of a major offensive against these criminals. The Jews are also revolting. So are the aware people of the West.

The revolution is now unstoppable. Soon the whole world is about to see the US equivalent of the fall of the Berlin Wall when the White House is