If all goes well, the satanic parasitical entity known as the UNITED STATES OF AMERICA Corporation will go bankrupt and implode this week. If that happens, then a domino effect will result in the removal of the blackmailed, bribed and brainwashed fools posing as leaders in other G7 countries. The US Corporation missed an external payments deadline on January 31st. They were given until this week to come up with the money or be cut off from the borrowed money they need to stay in business.

We are asking the mostly Asian creditors to please not extend them any more funds and let this main source of the worlds’ evil die. The White Hats are promising to move in after the implosion to restore democracy, freedom of the press and competent economic/social/environmental stewardship.

Of course the Khazarian mafia and their political slaves are hysterically trying to prevent this by starting World War III in Ukraine. It’s like a schoolboy trying to blow up his school in order to avoid an exam he knows he is going to fail.

Ok, let us start by looking at the signs the US Corporate government is imploding. The biggest signals are coming from the financial markets where insiders are rushing for the exits.

The chart below shows by far the biggest stock market sell-off in at least a decade. 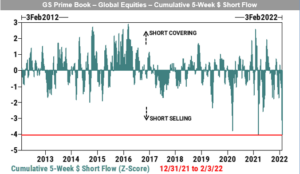 The same thing is happening in the US Treasury market where prices have imploded by the most since 1973 and probably ever. 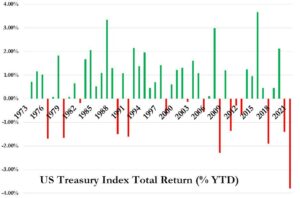 Any long-time market watcher knows that usually when stocks rise bonds fall and vice versa, when both collapse, it is a black swan event.

The whining by the fake Biden administration that “China didn’t buy the $200 billion a year from us they promised,” is a feeble excuse. The Chinese answer there was nothing to buy because US economy has been hollowed out and has nothing to sell except weapons (which they refuse to sell to China) and corn (the feedstock of their sheeple).

Even if the US Corporation once again pulls a dirty trick to kick the bankruptcy can down the road, the people are in open rebellion against their corrupt and incompetent rulers.

We note, for example, a growing rebellion by the rank and file Canadian military against their compromised top commanders.

We were sent this quote about the situation regarding Trudeau by a Mossad source and even though we do not know who said this, it is worth passing on:

It is not Trudeau’s choice to step down or to attempt to stay. It is the decision of the World Economic Forum (WEF). This is a critical decision that will affect the entire world. This is not a battle for just Canada, it is a battle for the World. This is the first domino of corruption and if it falls, the entire plan of the WEF fails because all the corrupt dominos will fall if they are forced out of power. Leaving them in power is simply a short respite for the People. 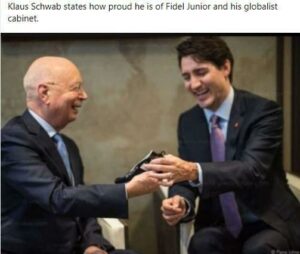 Frankly, the WEF cannot afford for Trudeau to step down. If he falls, Biden falls, Australia falls, New Zealand falls and all of Europe falls. Then the rest of the world joins in.

The sane world is crazy not to make Ottawa the hill they will die on and not give in. It is an opportunity unexpected. Probably an opportunity that will not come again.

Truckers can win this, but it will take support from everyone. There is a window of opportunity that will not stay open forever. Time is not on our side.

The WEF is not going to go without a fight or without having great fear that they will be smashed by this worldwide movement. Even then the WEF members will be sorely afraid of ending up like Mussolini hanging in the Milan Square and will fight to avoid that.

I do not agree that this is only about a non-violent confrontation. I don’t think the WEF will fold because of a lengthy non-violent protest of a few thousand truckers. They have been working on this tyranny plan for a 100 years. I think they will fold only if they are clearly weaker in strength than the People’s Army. Whether it is non-violent or violent confrontation, for either way to succeed requires great power standing behind the Truckers with obvious reserve waiting behind them. This means the WEF must act now before the People’s Army grows too large with strong reserves. I expect action by the WEF soon to squash this uprising. This is not about Trudeau, this is the WEF plan in place around the world. Everyone must be ready to heavily support the Truckers and step into the battle if they are attacked.

What these Canadian patriots need to do is demand the top brass and Canadian government provide proof that Covid -the excuse they are using to force toxic vaccinations- even exists. We have previously asked Health Canada, the WHO and the CDC among many other places to provide even a single specimen of Covid (Certiticate Of Vaccination ID) virus and they have not been able to. Instead, we have the Vaccinator in chief Pfizer CEO Albert Israel Abraham Borla saying they are basing their vaccines on a fake virus: “We didn’t study the ‘real’ virus, but a virus that we built in the lab.”

The real reason for the vaccine is the mark of the beast social control, not pandemic fighting. As evidence, the P3 Freemasons sent us this picture of a prototype ATM machine that will not less you access money unless you have proven you have been vaccinated. 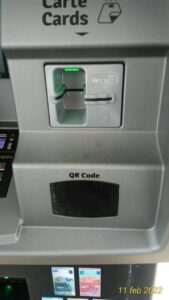 So, the military throughout the West needs to remember, forcing medical treatments on the people based on lies is a War Crime under the Nuremberg laws. It is punishable by death.

Already the Pharmacidical company CEOs are on the run. This news item for example notes:

Days after Pfizer admitted a safety audit could wipe billions off their stock market valuation, Moderna CEO Stéphane Bancel was dumped hundreds of millions of dollars in stock and deleted his Twitter account.

There have also been a lot of top world leaders arrested in the past week. For example, Prince Charles has been “arrested for