The EU or Nazi fourth Reich, knows it is checkmated and is trying to negotiate a surrender to Russia, multiple sources confirm. This means the fake Biden regime in the US will also have to surrender or die, the sources promise. “Ukraine is the head of the snake. Once it comes down there is no globalist empire anymore. It is finished,” explains an Australian special forces officer.

The reason for this defeat is that the Pentagon and the five eyes nations (Australia, Canada, England, New Zealand and the US) are refusing to fight Russia on behalf of the Nazi EU.

This caused the French military to do an inventory of Nato’s ability to fight Russia minus the Anglo Saxons. They concluded Nato could only hold out for five days against a full-scale Russian attack.

It is also clear this Russian move was planned long ago. That is why Russian President Vladimir Putin said in 2021 that Major European political figures have “spoken of the need to create a single space from Lisbon to the Urals. I believe, and I mentioned this, why the Urals? To Vladivostok.”

“Russian politician Vladimir Zhirinovsky knew that war would start on 22 Feb 2022. He knew the exact date a few years back!” an FSB source notes.

Even more intriguing, the Russian coat of arms shows a knight in a white hat trampling a reptilian. Is this just a coincidence or does this mean current events were planned centuries ago? 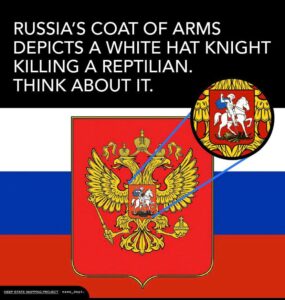 Whatever the case may be, it is clearly game over for the Khazarian mafia in Ukraine.

The Russian Ministry of Defense says the Kyiv regime has almost completely lost the ability to manage the administration of the regions and districts of the country.

The FSB and CIA are both saying Khazarian mafia Ukrainian puppet president Volodymyr Zelensky has long since fled to Poland. He has also been promised a rich retirement in Florida. See attached photos of his assets in Costa Rica at Dresner Bank ($1.3 billion) and his $34 million house in Miami, Florida. 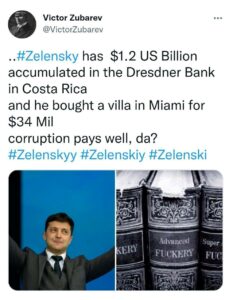 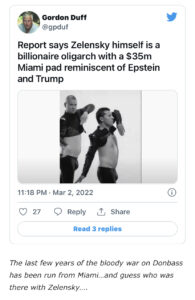 As for the Nazi foot soldiers using civilians and human shields in the Ukraine Putin does not expect to reach any agreements with “a gang of drug addicts and neo-Nazis that are holed up in Kyiv.”

The Russians say the Nazi troops in Ukraine will be treated as criminals and most will be killed outright. It is basically game over.

There is also military activity outside of Ukraine. For example, French intelligence sources say the nation of Moldova located between the Ukraine and Romania has “ceased to exist.”

Swedish intelligence sources say both Finland and Sweden surrendered to Russia last week and promised to stay neutral and stay out of Nato.

The de facto surrender of the rest of Europe to Russia can be seen in many public comments. For example, British Prime Minister Boris Johnson noted in an opinion piece in the New York Times that “This is not a Nato conflict and it will not become one…Russia has an overwhelming force…What happens in Europe will have profound implications worldwide.”

Talk of sanctions against Russia is also pure bluster. That is why German Economy Minister Robert Habeck says his country could not do without Russian oil and warned that “a shortage in supply could threaten social cohesion in Germany.”

To understand what the Russians are thinking, it is good to look back at what their Presidential Avatar Vladimir Putin told the Davos gangsters in 2021. He warned that ignoring “systemic socioeconomic problems” was a “dangerous illusion.” He noted “Modern technological giants are de facto competing with states,” and that “global business attempts to replace legal democratic institutions and essentially usurp or restrict the natural right of people to decide for themselves,” had to be stopped. In what amounted to a declaration of war against the KM corporate fascists he concluded “The world cannot continue creating an economy that will only benefit a million people, we must now proceed from stating facts to action,”

The Russian FSB is now negotiating directly with the White Dragon Society about how to replace the post-war Bretton Woods system with something that actually works for the people of the planet. When the FSB told a WDS representative that