There are growing signs we in the West are all watching a giant fake show and that the show is about to end. This came up in a conversation last week between a senior Russian FSB agent and a member of the White Dragon Society. “My guess is that we don’t actually have any presidents and all of this is a kind of staged reality show created before our eyes,” noted the FSB member. There is plenty of evidence to back this up.

Did you know, for example, that according to the official Russian Tass News Agency that Ukraine has not declared war on Russia? Also that the Russian gas still being sent through that country is still the main source of revenue for the government of Ukraine?

Also, did you know that Rothschild family-owned trading companies in Switzerland were still selling Russian commodities to the rest of the world?

Furthermore, despite the “embargo,” Russian oil exports to the US continue and are even increasing. For example, in the week of March 12-18, the US bought 70,000 barrels of Russian oil per day, 80% more than the previous week.

Then of course there is all the obviously fake footage about the Ukrainian “war” that is flooding Western TV screens. In the latest example, CNN is reporting a fire in Edmonton, Canada is in Ukraine.

The screenshot below (taken before CNN blurred it out), clearly shows it is the Edmonton fire department that is on the scene. 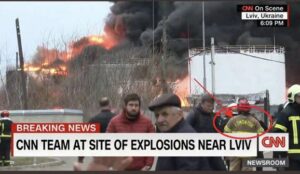 The Rita Katz studios (of fake Bin Laden fame) are also working overtime filming Rothschild employee and so-called Ukrainian President Volodymyr Zelensky, who is working out of his $34M mansion in Florida. The Russian FSB says he appears to be stoned on cocaine, and the footage below certainly makes it seem that way.

We will not delve too deeply into the fake pandemic except to note that mortality rates around the world are the same as in pre-pandemic years. We also note the pandemic does not exist in Africa and other regions whose governments refused to go along with the entire fake event.

High-level sources in both Eastern and Western secret societies say the fake show going on is just part of a process to wake up the deeply brainwashed people of the West. It is being set up as a sort of initiation ceremony for the West. In anthropology, such ceremonies are called “liminal events” and refer to things like weddings or coming of age ceremonies that mark a major transition in life. In this case, the ceremony is being carried out to start a new age of love, progress and harmony with nature, the sources say. This will be made clear soon, the sources promise.

However, before that can happen a very real international military, agency and police crackdown on an ancient Satanic cult that seized the top levels of power in most Western countries needs to be completed.

This campaign is reaching an end as most of the top leaders of this cult, including Hillary Rockefeller (Clinton), Jens Psaki (aka Mark Zuckerberg Rockefeller) and Klaus Rothschild (Schwab) have been arrested. These arrests appear in the form of announcements they have contracted Covid 19 (despite being fully vaccinated) and are “self-isolating.”

Of course, the Khazarian mafia will try to pretend this is not happening by presenting fake versions of their leaders to the public, Below for example are three different versions of Killary. 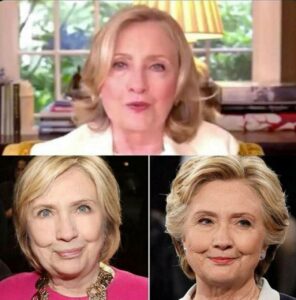 This is what a Mossad source had to say about Psaki:

She has been taken in again repairing the glitch in her programming. We both have the feeling that the original is “out of service”. After the last round of testing positive 5 months ago and she disappeared for like 10 days. Look at her eyes. They are blank. Like without a soul. A sign of an avatar AI construct. 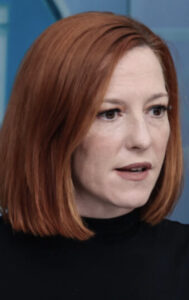 The members of this cult, also known as Sabbatean-Frankist Jews or the Khazarian Mafia who for years really have been trying to carry out a fake Armageddon. The show we are being subjected to on our screens is their re-enactment of