The international alliance fighting to liberate humanity from the Satanic Khazarian mafia scored a series of major victories in the past week. The biggest is a growing international boycott of their fraudulent financial system. Russia, China, the Middle East, Africa and Latin America are all joining this boycott. Once the KM loses control of money, it is truly game over. 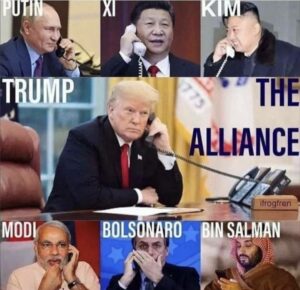 This move went into effect on April 1st, when Russian President Vladimir Putin signed a decree that demands ‘unfriendly countries’ pay for Russian gas in gold and asset-backed rubles.

The propaganda talk of “global sanctions” against Russia by the US corporate government is a pure bluff because it is the most indebted entity in human history, with over $200 trillion in unpayable bills. Also, Russia has an estimated $75 trillion in natural resources compared to about $45 trillion for the US.

‘”A new reality is taking shape: the unipolar world is irretrievably receding into the past and a multipolar world is being born. This is an objective process that cannot be stopped, there won’t be one single ruler in this new reality….Nobody on Earth will be considered a second-rate player. All nations are equal and sovereign.”

The rest of the world turned decisively against the KM-controlled G7 in part because the Russian Defence Ministry published documents about secret military biological activities of the United States in Ukraine. The documents identify: specific officials involved in the creation of biological weapons…these campaigns were directly linked to the son of the current US president, Hunter Biden…work with strains of particularly dangerous pathogens being carried out on behalf of the Pentagon, has been stopped…Of particular interest are documents indicating the Kyiv regime’s plans to use drones capable of carrying and dispersing lethal substances.

The documents are supplemented with the permission to export the bioweapons to EU countries, USA, Canada and Japan.

Hence the international boycott. Already, the Russian gas giant Gazprom has officially halted all deliveries to Europe via the Yamal-Europe pipeline, a critical artery for European energy supplies.

This caused Germany to trigger an emergency plan to manage gas supplies while Greece called an emergency meeting of suppliers as the Dutch government urged consumers to use less gas, the French energy regulator told consumers not to panic.

The effect on the people will cause a revolution as prices at German retail chains explode between 20 and 50%.

The fake US president Joe Biden was also forced to dip into strategic oil reserves after the rest of the world refused to accept their worthless dollars as payment.

The US government is already in a state of full collapse. The latest evidence for this is the record number of job openings in the US. This is not due to a growing economy but rather a growing “crime-force participation rate…If you can steal $900 without prosecution, this encourages crime and reduces the incentive to take a job” explains financial expert Jeff Gundlach. Police cannot enforce petty crimes because they cannot even deal with major crimes due to a complete breakdown in law and order. In other words, a slave revolt is underway in the US.

More and more people are becoming aware that the governments of the G7 countries are under the control of a Satanic cult that is trying to kill them, Here, for example, here is what Satanic Chabad Leader and Messiah Menachem Mendel Schneerson says about Russia:

”Slav, Russia, can be destroyed, but never conquered. That is why this seed is subject to liquidation, and at first, a sharp reduction in their numbers…. the renegades, “married” with the [Khazarian] Jews by common interests…will be withdrawn from our society once we use them for our own purposes.”

Of course, if they kill the Russians they will then try to kill the Chinese and other people. The world is now being presented with irrefutable proof that this cult is trying to massacre 90% of the world’s population and enslave the rest. That is why the international boycott has taken effect.

Now even the international drug mafia has announced action against the KM. Last week a representative of the worlds’ heroin, cocaine and marijuana trafficking cartels contacted the alliance to say