The war in Ukraine has taken an esoteric turn with both sides carrying out mass incantations and invoking spiritual powers. “All the evil forces from all over the planet have been gathering in one place in Ukraine for the last stand,” is how a Russian FSB source describes the situation. Meanwhile the Khazarian mafia witches, Satanists and neo-Nazis claim they have been preparing for 40 days “an incantation to cure Putin, and Russia.” 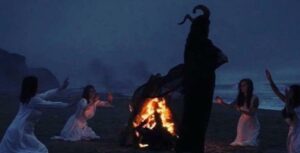 “We are ready. Our rite has been developed by a team of serious practitioners from day one. We did a lot of preparatory work, breaking through the defenses of enemies, carefully planning and selecting rituals,” the witches stated.

In response the Russians “summoned all the Shamans of the North to get the nature gods to protect Russia,” the FSB says. Here you can watch the Shamans at work.

The Russian Orthodox Church has also publicly stated the Ukrainian government is using “witches and satanic rites” against the Russians. Orthodox Priest Andriy Tkachov says “Ukraine has nothing left but to ask for help from demons.”

The Russians have issued plenty of proof they really are fighting Satan worshipers.

For example, after they destroyed a post of the ‘Forward Observation Group,’ an alleged U.S. mercenary unit of former military and special operations currently in Ukraine, the Russians provided evidence they “worship the devil in the truest sense of the word.” 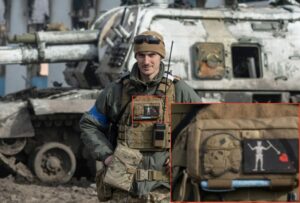 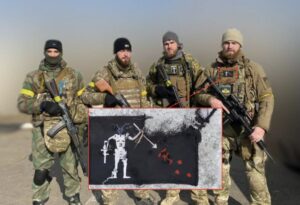 It is a fact the US special forces command was headed at one point by the self-declared Satanist General Michael Aquino. 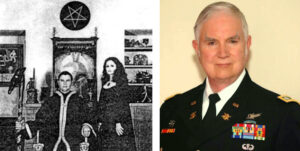 Aquino has since been sent below to meet his master, according to alliance sources, and now it appears some of his disciples have joined him there.

So let’s take another look at the KM people who now run the Western Worlds’ financial system and mega-corporations. They explicitly and repeatedly have said “in order to save the environment” they want to kill 90% of the worlds’ population of “useless eaters.” After the alliance told them that -if they were sincere in their wish to kill 90% of people- they could prove this by agreeing to be the first to die, the KM have changed their tune. Now they are saying they will put 90% of people on “basic income,” and keep them playing video games while stoned on drugs.

Yuval Harari, the Guru of World Economic Forum head Klaus Schwab Rothschild, says things like: Humans are now hackable animals, free will, that’s over…this story of Jesus rising from the dead, that’s fake news…Covid is the moment when surveillance started going under the skin….The biggest question over the coming decades will be what to do with all these useless people.” 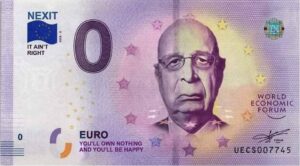 What these people really have done though is admit their incompetence by saying they do not know how to make these people “useful.”

I will never forget when these people invited me to join them they said “there is no God, we are God.” There may not be a God but we did not create ourselves, something else created us so, there is a creator. The alliance proposes making all humans “useful eaters,” by asking them to plant gardens, support small animals and otherwise contribute to the creation. We may not be God but we are all stewards of our local creation and we can all work to improve it by increasing the number of plants, animals and even silicon etc. based lifeforms in our local area. 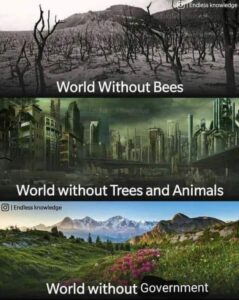 Although these people are definitely not God, they remain powerful and dangerous. The Khazarian Mafia politburo is the Octagon group headquartered around Lake Geneva in Switzerland. They control Western leaders such as Boris Johnson of the UK, Emmanuelle Macron of France, Justin Castro of Canada and of course the fake regime of Joe Biden.

They also control the Pope via his personal security, the Swiss Guard. After Pope Francis went rogue on them, they replaced him, first with a hologram and then with a rubber mask-wearing impostor. 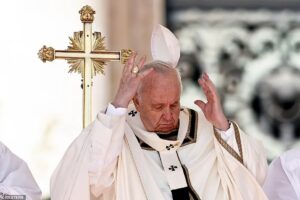 You can see that it is NOT Francis.

If a picture does not convince you, then listen to his words. He talks about “’coprophilia’ or sexual arousal and pleasure from feces, openly supports homosexuality (this is not meant as a homophobic comment but is clearly not the stance of the original Francis) and pushes dangerous vaccines.

On Easter, he went further by saying “We find it hard to believe that Jesus has truly risen, that he has truly conquered death. Could it be an illusion? Fruit of our imagination? ”

What these idiots fail to realize is the resurrection is a metaphor for spring, the renewal of life.

In any case, the battle to overthrow these monsters is going very well for the alliance. After weeks of radio silence, we finally got a hold of a member of an Asian secret society. They said