Despite resorting to extreme fascist repression, the Khazarian mafia slave regimes of the G7 are mathematically doomed. The reason is financial. They made the fundamental mistake of thinking that numbers on financial institution computers were real and not imaginary. This is why, for the first time in my memory, the G20 finance ministers did not issue a statement after meeting last week. If they had been honest, they would have declared bankruptcy.

IMF Director Kristalina Georgieva came close to making such an admission at the meeting when she said “We printed too much money and didn’t think of unintended consequences…We are acting like 8-year-olds playing soccer chasing the ball.”

As the Zero Hedge Article linked below notes:

Since the Lehman failure in 2008, the combined balance sheets of some of the major central banks have increased from just under $7 trillion to $31 trillion (Fed + ECB + BOJ + PBOC, according to Yardini Research). The steepest part of the rise was from March 2020, when assets for the Fed and ECB soared…if the global conflict is financial, the West has lost it already. The geopolitical consequences are another story for a later day.

Even more disturbing, for me as an Anglo-Saxon, is that when the US, Canada and England tried to stage a walkout of the G20 to protest against Russia, nobody followed.

The Anglo-Saxon nations used to have the respect of the world because they stood for democracy, human rights, competent economic management etc. I’ll never forget when I asked the former head of MI6 “We used to be the good guys, what happened?” His answer was “the Khazarian mafia.” This is because, like a caterpillar that has been infected by a parasitic wasp, the governments of these countries have been taken over by Satan worshiping Khazarian gangsters. So, the politicians and military of the West were redirected -against the interests of their own people- to a project to turn the entire planet into a giant animal farm. This was to be run by Khazarian gangsters out of their ancient homeland, the place we now know of as Ukraine.

The KM took over the governments of most Western countries through a process of murder, bribery, blackmail and lies. This was directed at the very tip-top of the elite. Understanding the problem lies at the tip-top is also the key to overthrowing the KM. Just like a pimple, if you squeeze it from the bottom up, the pus comes out at the top.

Members of the public need to call their MPs and confront them with evidence of the crimes of people like Justin Castro. People in the military need to go up their chain of command and do the same thing, confront their commanders with evidence. Those who fail to act on this evidence will be revealing themselves as traitors. The punishment for treason is death by firing squad.

Here is some of the vast amount of evidence people can use in the case of Canada:

Canada’s Elections have been sold and their vote doesn’t mean a damn thing in reality. It’s all about who has the most influence, or who pays the most $$. This picture of Justin Castro with the Dominion server and Alex Soros together is just a fragment of the evidence for election theft i.e. treason. 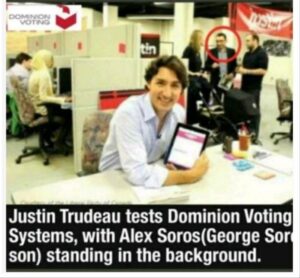 If that’s not enough, Castro passed a bill into law on April 14th 2022 -under the guise of child protection- that turns kids into government property.

“He who sows hatred reaps… hatred…You can feel the shift that is taking place right now, remember the situation two years ago and see: The people are no longer afraid of the elites, that’s why the game is over” a member of the Canadian Security Intelligence Service comments.

This is shown in how Castro gets a “warm” welcome every time he is confronted by the people of Canada.

Rest assured it is just a matter of time before he faces a firing squad.

This sort of hate of the ruling class is seen all over the west. Remember “Let’s Go Brandon,” calls that make it impossible for Joe Biden to appear in public.

Here is an example from Germany of citizens confronting police.

Ok so now let us take a look at the election that was stolen in France last Sunday. According to a CIA source, in exchange for agreeing to “lose,” opposition candidate Marine Le Pen “will