The global alliance against the Satanic Khazarian mafia scored major victories last week on multiple fronts. Most importantly, the Federal Reserve Board building in Washington DC has been fenced off 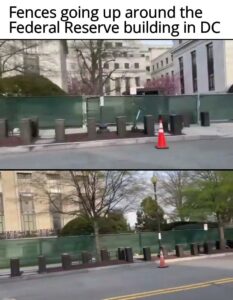 while Deutsche Bank was raided by German police. This has cut off the KM’s ability to launder fiat funny money into the real economy via the stock and bond markets, MI6 sources say. That is why Apple, Alphabet (Google), Microsoft, Tesla and Amazon share prices are down respectively 11, 22, 16, 29 and 30% from their peaks.

If the Khazarian mafia loses the ability to create money out of nothing in order to finance their plan to enslave humanity, then it really is game over for them. Without money, they cannot pay for their goons, “celebrities” and actors pretending to be politicians.

However, we must not be complacent and need to remember exactly what we are fighting for. These people have repeatedly stated their goal is to kill most humans and domesticate the rest. To get a perspective on this, compare the T rex to its descendant, a domesticated chicken. The mighty alpha predator is now a tiny caged animal living a fraction of its natural lifespan in horrific conditions. If they did the same to humans -as they plan- then male children will be tortured to death at around age six months to harvest adrenochrome before they get turned into “nuggets.” Females will be kept as sex slave breeders until about age 25 when they will be turned into sausage.

Also, disturbing though it is, readers need to understand exactly how adrenochrome is harvested. This has been proven in videos where Hillary Clinton tortures two young girls relentlessly, rips off their faces and finally, while they are still alive, stuffs pincers into their noses to pull out their pineal glands. Clinton has been filmed eating a pineal gland taken in this manner. Nine out of the 12 New York police officers who saw this video have been suicided. The other 3 are in hiding but multiple copies of this video have been disseminated. A sanitized but still graphic and disturbing version can be seen here;

You can see why the KM are fighting for their lives. Our CIA sources say the Azov battalion Satanists holed out at the steel plant in Mariupol are fighting to the death because they know they will be killed as soon as the adrenochrome harvesting facilities there are exposed.

We have also been told that similar facilities to torture children are to be found worldwide, including in the underground tunnels beneath Disneyland Florida. Disneyland also regularly sent tour boats full of children to Epstein Island in the Caribbean, many of whom never returned. The sources say the movie “Monsters inc.” which describes “fuel” being harvested by terrorizing children, is about adrenochrome. For more, please watch the first 18 minutes of the video linked below.

We contacted the media relations department at Disney to ask for comment but did not get a reply by the time this report went live. However, in what may be just a coincidence, Disney “communications chief” Geoff Morrell just resigned after only three months on the job.

Ok so now let us look again at the state of the battle to liberate humanity from the KM. Here, the end of the fake Biden regime comes one step forward as US fake Vice President Kamala Harris “gets covid,” i.e. is arrested. According to her press secretary “Today, Vice President Harris tested positive for COVID-19 on rapid and PCR tests…She has exhibited no symptoms, will isolate” She is fully vaccinated and boosted twice -she received a total of 4 vaccine injections. 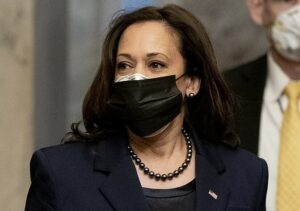 “It is unlikely the Senate will be able to pass anything this week without Sen. Ron Wyden, D-Ore., and Sen. Chris Murphy, D-Conn., who both also tested positive on Tuesday, and without Harris as the tie-breaking vote,” notes the Daily Mail.

They may well try to produce a CG version of Harris to make it appear that all is normal. This is what Mossad sources say they did as avatars of Adam Schiff, Nancy Pelosi and a few other politicians just supposedly secretly visited Ukraine. a country under attack by one of the most powerful militaries in the world.

Maybe they are trying to explain their absence in the US by saying “they are in Ukraine.”

Speaking about Ukraine, Secretary of the Russian Security Council Nikolay Patrushev warned Europeans that “Representatives of the criminal community that fled from Ukraine will attempt to occupy niches benefiting them” including drug and human trafficking. Watch out for your kids folks.

Russia is also inviting US officials, including Victoria “fuck the EU” Nuland to a parliamentary commission investigating the activity of US biological laboratories in Ukraine. This means the KM-occupied US has been caught in the act of trying to kill off most of humanity.

The Chinese Foreign Ministry, reflecting the views of most of the world, publicly labels the US as a rogue state acting in violation of international law.

Many European countries agree and are distancing themselves from the KM-occupied US. That is why, in the latest sign that Russia is winning in its campaign to remove Satanists from the Ukraine, Poland, Italy, France, Germany and Bulgaria etc. were all forced to back down on their threat to cut off Russian gas money and have begun paying in Roubles.

We are also seeing a big split in the ranks of the ruling oligarchy in the US. Elon Musk, of Tesla, has apparently gotten off the fence and is now openly supporting the white hats. This is significant because Musk is the son of a prominent Nazi