Khazarian mafia agents Justin Castro, Chrystia Freeland, Jill Biden and others have fled to Ukraine as KM rule collapses, CIA sources say. They have fled to avoid arrest for war crimes as their crimes against humanity become impossible to hide, they say. That is why “actors, actresses, rock stars, comedians and world leaders are visiting Ukraine,” another CIA source notes.

If you still do not believe these people are fleeing to avoid being rounded up, take a look at this Google Earth screenshot of the prison at Guantanamo Bay. That is clearly a facility designed to hold thousands of KM criminals.

That is why their overlords, the Rockefeller clan, who were behind the entire fake Biden regime, are now trying to negotiate a surrender, Asian secret society sources say. In Europe, meanwhile, their other masters, the Rothschild family, are trying to get protection from their former slave colony of Israel by claiming exposure of their crimes is “anti-semitic.”

The problem is a critical mass of Jews is now aware their ruling families were deeply involved in the Holocaust (burnt offering to Satan) as a part of their messianic project to chase the Jews out of Europe and into Israel. They wanted to become kings of the Jews, against the will of the Jewish people. The fact that Israel refuses to support their campaign to create greater Khazaria in Ukraine is proof of this.

The collapse of KM rule in the West may be the trigger for something that has never happened before in our history. Russian, Asian and Secret Space Program sources say some sort of earth-shaking, mind-blowing event may happen soon, with some predicting it for this week. As usual with such predictions, we will believe it when we see it but, as we will report below, there is some extremely unusual project blue beam-related stuff going on in Antarctica and elsewhere.

Let us start by looking at the situation in Ukraine, where the last of the KM leaders are seeking shelter. According to Western experts, Ukraine has already lost the war, as it lost:

All refineries and large tank farms

Oil and gas fields on the Black Sea shelf. 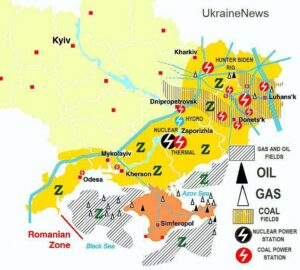 That is why the United Nations Security Council issued a unanimous resolution calling for an end to the “dispute” in Ukraine. Notice they did not use the word “war.” In other words, they are admitting it is an internal Russian matter. The fact the US, the UK and France are going along with this resolution speaks volumes. It is a surrender

Ukraine is now being dismembered. The southern and eastern parts will become part of Russia, while Poland and Rumania take over large chunks of the Western part.

That is why The President of Poland called for the abolition of the border between Ukraine and Poland. “There will no longer be a border between our countries. So that we can live together on this earth, building common happiness and strength that will allow us to repel any danger,” Polish President Andrzej Duda said.

The question now is whether Russia will allow a small rump state of Ukraine to function as a sort of reservation for the last of the Khazarian Mafia.

Probably not because, as Russian State Duma Speaker Vyacheslav Volodin said on Saturday “The US leadership should also be held accountable for the crimes committed by the Kyiv Nazi regime in Ukraine, thus expanding the list of war criminals,”

Their crimes have been by no means limited to Ukraine. In Syria, the KM military branch, going under such brand names as Al Qaeda and IS, was systematically murdering men to claim their children and women as war trophies, says US Colonel Richard Black who was there. The KM

(who want to enslave all of humanity),

held slave auctions there where the highest bids were for children, he says.

In the United States, according to the FBI, 40,000 children have been vanishing every year for decades. Most of these children were probably tortured to death to harvest adrenochrome, multiple witnesses are now saying.

When this comes out, as it now is, there will be nowhere either on or off this planet for these criminals to hide.

Speaking about criminals hiding, let us look again at Justin Castro, the election stealing Manchurian candidate who tried to turn Canada into a totalitarian slave camp. Our sources in the Canadian Secret Intelligence Service tell us the Canadian Forces National Investigation Service (CFNIS) has been