Recently a member of the Earth Liberation Alliance delivered a handwritten note to a senior Jesuit that read: “Satan has returned to the original creation and received absolution, thank you for keeping the candle burning all these long years.”

The alliance has received intelligence that Satan was defeated years ago and what we are seeing now happening across the planet is a mop-up operation to remove his local field agents notably the top members of the Rothschild (red shield of Satan) family.

Here is what Queen Elizabeth II -a senior member of the alliance- had to say on the occasion of her Platinum Jubilee:

Many happy memories will be created. We remain very deeply committed to our shared causes East and West. The general stewardship of the geopolitical landscape had been predominantly Western, the Opioid device by our Rothschild among many families at the rub of the falling out which was not our design but they make money where they can and pretend to be not what they are – in the end, common is common and royal and imperial rise above it.

In what appears to be her contribution to the project blue beam celebration of the start of a new Golden Age, she time traveled back 70 years by appearing as a hologram in the ancient British Royal Carriage. 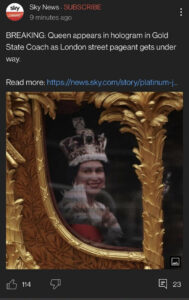 Also, in another sign Rothschild rule is ending, the government of Afghanistan is eradicating the poppy plantations that are the source of 80% of the worlds’ opium and heroin. This will deal a mortal blow to the criminal elite of the West.

In another major sign that a new Age is about to begin, Italian and Catholic media have been rife with unsourced speculation that the 85-year-old Pope Francis is about to resign.

Of course, the real Pope Francis is long dead so what we are talking about is the defeat of the people controlling the current fake rubber mask/CG pope. The P3 freemasons -who forced his predecessor to resign- say Francis will probably be the last Pope ever.

Even the Russians are talking of end times with Russian Security Council Deputy Chairman Dmitry Medvedev saying “One can have different attitudes to it, one can believe that the horsemen of the Apocalypse are already on their way and all hope is in Almighty God.”

We also see the de facto spokesperson for the Secret Space Program, Elon Musk, now coming out fully and publicly against the Satanic cabal that seized power in the West.

“Elon Musk is laying it on thick. He is exposing the KM corrupt Media…. He is obviously siding with the Alliance on this one,” a Mossad source comments on this headline:

“Elon Musk Says ‘No One in the Media Cares’ About Exposing Jeffrey Epstein’s Alleged Clients.”

This does not mean the battle is over yet. The people of North America are now being held hostage by the criminals running the fake Biden and Trudeau regimes. Several parts of Europe, including France and Ukraine, are also still under Satanic control.

So a military, information, legal and economic hybrid war is being waged by the alliance to liberate the people of these countries.