The world is going through a fundamental shift as the Western world is being cured of its Satanic infection. The result will be an unprecedented era of world peace and prosperity. This will be the legacy of the “make love not war,” hippy generation.

However, before this new age can start, some final housecleaning is being done. This can be seen in the international isolation and financial collapse of the fake Joe Biden regime in the United States. The collapse is accelerating as the Khazarian mafia “Biden” regime falls into pariah status.

As an example, last week the Biden avatar called a summit of the “Americas” only to be boycotted by the majority of states in the region. Cuba, Venezuela, Nicaragua, Mexico, Guatemala, Honduras, El Salvador, Uruguay and Bolivia were among the countries to boycott the meeting. Leaders of countries that did attend, like Argentina and Belize, took the opportunity to criticize “Biden.”

The rest of the world, including Africa, the Middle East, Asia (except for the Japanese and South Korean slave states), and a large part of Europe is also shunning the openly criminal US Corporate government. That is why an international boycott against it is causing an economic free-fall there.

Before we go further into the boycott of the US Corporation, let us look at the Iberoamerican revolt against it because huge and under-reported events are taking place in Latin America.

“What I can say with some certainty is that there is a general feeling of disgust here towards what the Jews [Khazarian mafia] have turned Anglosaxony into, and more generally, the West, including parts of our own countries,” says a source who claims to have just finished extensive talks with Portuguese and Spanish power brokers.

That is why the Russians have begun stationing troops and warplanes in Latin America as a move to counter Nato incursions on its own borders, other sources say. This news item, for example, confirms that Nicaraguan President Daniel Ortega has invited Russia to deploy its armed forces in the country “for humanitarian purposes,”

Our sources in Mexican US military intelligence say the troops are already there along with a contingent of Chinese special forces.

This revolt against the US Corporation is why Iberoamerican narcotics gangs have stopped supplying adrenochrome to the Western elites. They have now taken action. Last week Mexican police arrested a “Nelson N” the alleged head of an international gang of pedophiles. “Nelson” was inexplicably released by Dutch authorities despite being found in 2020 with over 10,000 pornographic images of infants and children.

What the Spanish article linked above fails to mention is that hundreds of naked children, each bearing an identification number, were freed during the arrest of “Nelson,” according to Mexican intelligence sources.

CIA sources for their part reminded us that at his trial Sinaloa Cartel boss Joaquin “El Chapo” Guzman, “stated in court that Comex helped launder $150 million in cartel money for [US House Speaker Nancy] Pelosi.” It appears only those who were at the trial are aware of this, the CIA source notes. 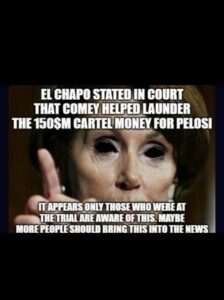 The Mexican sources also told us the Mexican drug cartels are all united at the higher levels and are ruled over by a single individual, a Mexican national who sits one rank above the publicly-known cartel bosses. This unidentified person, Mexico’s most powerful, is taking orders over the phone from a Greek individual in Greece, they add, This Greek individual in turn reports to the Orthodox Church people who also control the avatar of Vladimir Putin, Russian FSB sources say.

Once the North Americans are liberated from the KM, the Iberoamerican sources say they welcome the idea of creating a super-state uniting North and South America. Reflecting this, Mexican President Andrés Manuel López Obrador called for just such a thing at a Press conference saying “The option is [continentall] transformation and you have to dare to do it. And you don’t have to keep thinking about the next election, you have to think about the next generation.”

Getting back to the Russians, we were sent evidence last week by Mossad that the original Russian President Vladimir Vladimirovich Putin was arrested “for the theft of state property on a large scale, financial fraud, abuse of authority, preparation of an act of terror to intimidate the population and influence the government.” As proof, they provided us with the video of his trial posted below.