The removal of the top ranks of the Knights of Malta by the Vatican means the entire leadership of NATO has been fired, P3 Freemason sources say. There is also a purge going on inside Vatican city as “Zionist cabal” members are being removed, the sources say. This is causing a leadership vacuum in the G7 group of countries as their entire economic/social system collapses.

We are also getting multiple reports from intelligence agency sources around the world of a new 911 or Fukushima-type event being planned for this month. High-level sources are mentioning dates like September 8th, 11th and 23rd. This is all part of a Khazarian Mafia attempt to extort money from the rest of the world as the September 30th payments deadline for the UNITED STATES OF AMERICA corporation and its KM owners approaches.

In this context, there is a very real probability the EU and most governments in the EU will collapse, possibly before the end of the month. That is because the Russians have cut off gas flows to Europe while the rest of the world has also stopped sending oil to the region. This is not just about heating European homes either: the cut-off is certain to lead to a shutdown of most industries in Western Europe. For example, a business lobby says high energy prices are already threatening to shut 60% of UK factories.

To deal with this situation it appears the UK government has begun to start using previously forbidden Tesla energy technology as this photograph of Tesla coils taken in England recently shows. Other countries may have to follow suit. 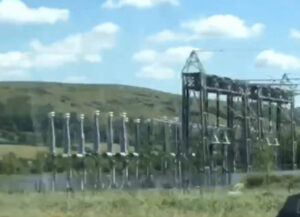 The shutting down of the Nordstream 1 gas pipeline to Germany for “technical reasons” has been widely reported but, it is only the tip of the iceberg. Unreported so far is that a Russian submarine entered the Mediterranean last week and cut a gas pipeline that was sending fuel to France from Algeria, the P3 sources say.

In yet another blow, Zaporizhzhia, Europe’s largest nuclear power plant, was “severed from the national grid for the first time in its history after transmission lines were cut, prompting power cuts across Ukraine.”

“The majority of thinking people the world over realize that it is Russia who is on the side of truth and is doing its best to thwart a global Nazi comeback,” Foreign Intelligence Service Director Sergey Naryshkin explained on September 3rd. “I am confident that the inevitable destruction of the hegemony of the West’s liberal-totalitarian regimes will also make the world a more open, honest, and just place,” he added. 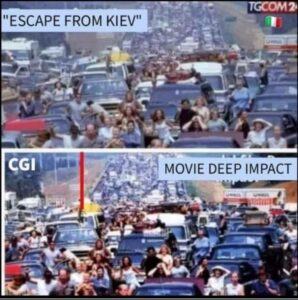 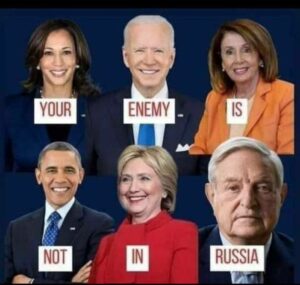 With this background, mass demonstrations are continuing across Europe, most notably in the Czech Republic and France. The situation has reached the point that Germany has created a new military unit to patrol the streets and enforce martial law starting on October 1st (the day after the Sept. 30 payments deadline) in anticipation of mass rioting and civil unrest.

As this is happening a series of assassinations and intrigue are being seen at the very tiptop of world power. For example, last week Christine Chadwick – the private secretary to the head of MI6- was killed in what was “probably remote covert scalar type assassination covered with probable suicide – suicided is the formal forensic term,” MI6 sources say. Her body was cremated before MI6 could carry out a forensic examination to determine the cause of death, they add.

The assassination was carried out because Chadwick was getting close to the people who assassinated former M1 (the guy who controls the FED money tap) Adnan Sakli and took over control of the Federal Reserve Board money printing apparatus, the sources say. George Bush Sr. was executed in retaliation for this murder but, control over money printing inside the US remains in the hands of the Nazi faction of the KM, they say.

Russian FSB sources say a lot of this intrigue and chaos comes because the person who set off this chain of Satanic events,