The Khazarian mafia, headquartered in Zug, Switzerland, is trying to negotiate a peace agreement with the rest of the world as their top man Evelyn de Rothschild dies and their empire collapses. As a part of this, the Octagon group, the head of Interpol, the new Chinese emperor and a group of Swiss billionaires (who control the area around Lake Geneva), have asked the White Dragon Society to send a representative to Switzerland. The situation has even reached the point where Russian men in black, who deal with paranormal entities, have made a move (more about this later).

However, Queen Elizabeth II, before her recent murder, warned against going to Switzerland because “it was a trap.” Mossad sources agree. So, for now, the WDS has decided to wait for the old Swiss-run Khazarian mafia-controlled “new world order,” to collapse.

This collapse is now taking place at an accelerating rate, especially with the ongoing implosion of the United States.

This week’s G20 meeting in Bali, Indonesia, may be the last show of control by the KM who will try to portray Russia as being “isolated,” when in fact the opposite is true: the United States has become the laughing stock of the world.

says the situation in the world is still very tense because of “insistent attempts of the US-led Western alliance to stave off the complete loss of their global leadership in a hope to continue to resolve their problems at the expense of other members of the international community. This is the goal of the neo-colonial concept of the rule-based world order advanced by the Americans and their allies.” He then added “the overwhelming majority of countries” do not support this agenda. https://tass.com/politics/1533715

Most importantly, Germany and the EU have broken with the KM-controlled US and made a deal with Russia. That has now been confirmed by Russian Defense Minister Sergey Shoigu ordering his troops to the Russian side of the Dnieper River.

As the Russian Tass news agency notes: “Germany intends to improve relations with Russia and China, despite US’ objections…Let’s not forget that the Netherlands lifted sanctions against Russia…the US does not have the power to impose order on the world and introduce new rules.”

At this point, the KM control grid has been reduced to Canada, the US, Ukraine and Switzerland.

Even this won’t last long because the KM-occupied US collapsing both politically and economically. The fact they say they cannot figure out who won the November 8th mid-term elections until December or beyond illustrates the political paralysis. That is why “Arizona election officials are prepared to work through Thanksgiving and possibly Christmas as well”.

Here are more visuals related to this farce. 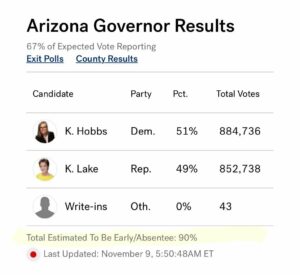 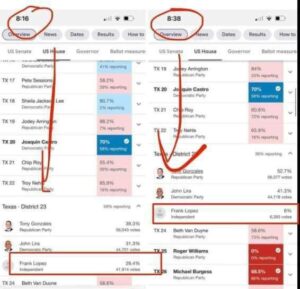 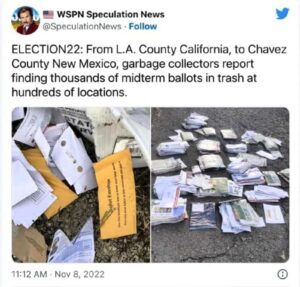 Even if the Rockefellers can keep their Biden clown show going on for a bit longer, the ongoing US economic collapse will bring it all down sooner rather than later.

For example, the article linked below shows 11 recent signs of this collapse.

Even Silicon Valley is now being hit. Over just the past week alone 20.000 people have been fired. Twitter, Facebook (Meta), Stripe, Salesforce etc. have been dumping staff and places like Amazon and Google are close on their heels.

This is just the beginning of the pain because the US default on October 14th means imports of oil from the Middle East and goodies from Asia are drying up. That is why empty container ships are being recalled from the US to elsewhere.

And as a result shortages of daily items have begun in earnest.

More importantly, according to MI6 the death of Evelyn de Rothschild was probably linked to stress from that family having lost control of the financial printing presses that kept the entire US/Ukraine horror show going.

It is no coincidence that his death was followed by the collapse of Sam Bankman-Frieds’ FTX and his hedge fund, Alameda Research. This was a giant money laundering operation that took the over $100 billion pledged for Ukraine and sent it to finance election theft in the US, Mossad sources say. 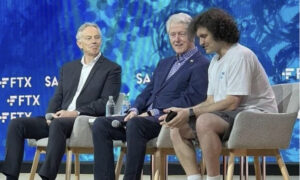 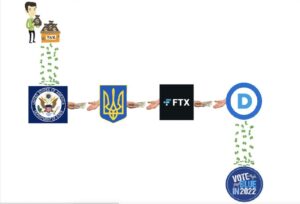 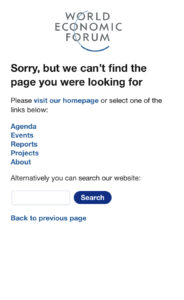 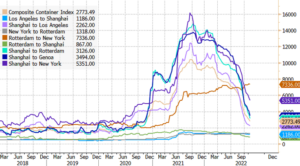 “This FTX situation may be the straw that breaks the financial system and the Fake Biden circus show,” the sources note.

In the end, this implosion will probably destroy the entire Davos World Economic tragi/comedy as this tweet notes:

“Dear Davos elite and @wef: it appears you accidentally deleted your FTX Partner website. Lucky for you we found it in the internet archive”

Now check out the photos of Sam with his buddies Bill Clinton and Tony Blair.”

With this central bank fiat money laundering operation shut down, no wonder the WDS got a flurry of calls from Switzerland last week.

This is where the Russian men in black come into the picture. As an FSB source explains “In Russia we have a group of ex-KGB generals who