There can be no doubt the planet earth is going through changes that are beyond biblical in proportion. That is why an ancient secret society -with roots going back to the biblical Jacob in Egypt- as well as space Nazis on flying saucers are coming out of the closet. This is happening because an esoteric war that has been raging for thousands of years is coming to an end. What we are witnessing is an end to millennia of Satanic rule on this planet.

This is visible in huge changes taking place in governments around the world, most notably last week in China, the United States, Israel and Brazil.

Let us start with events in China because they hold the key to so much else that is happening and is about to happen.

The plan the Satanists had for this planet was to genetically modify every human into farm animal-type obedience, microchip their brains and control every aspect of their lives through constant, intrusive digital surveillance. In other words, literally, turn the planet into a giant human farm.

Communist China had gone the furthest toward that goal. All Chinese were given digital IDs and the entire country was covered with cameras that could immediately identify every individual in the country. Those that failed to obey would not be able to ride trains, access bank accounts, buy food etc.

Bio-weapons and electromagnetic death rays (5G) were then used as an excuse to enforce total obedience on the population. We have all seen these images of white-suited AI-controlled humans enforcing the system.

Well, the Satanists underestimated the Chinese. Chinese history shows that people will put up with a lot, but, when a certain point is reached, they simultaneously explode into rebellion. 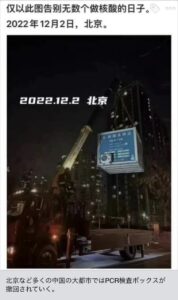 The Asian secret societies are also aware the so-called pandemic was a combination of a 5G electromagnetic attack with the release of viruses by Rothschild-controlled laboratories in China.

It is no coincidence that Klaus Schwab Rothschild was spotted at the Waldorf Astoria hotel in Washington DC last week. 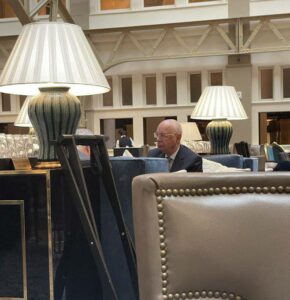 Shortly after that appearance, reports came out Schwab had died. 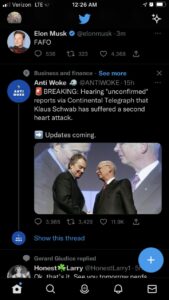 This is what a White Dragon Society source had to say:

“This rumor is being circulated as Schwab has been apprehended by the White Hat Military Alliance. This Schwab may not be seen again. There is an avatar being prepared now. Not to worry as the Alliance is aware as well”.

The WDS also sent a representative last week to meet the head of an ancient Japanese society known as the Yatagarasu or three-legged crow. This is the group who claim they founded the Shinto religion after a three-legged crow led them to Japan in ancient times. The members of this group claim to be descended from the ancient lost Israeli tribe of Ephraim as well as from members of the priestly tribe of Levi. They claim they can recite their ancestry back over a hundred generations to the biblical Jacob in Egypt.

It is interesting in this context to note Shinto is very similar to ancient Egyptian religion featuring worship of the sun god and the annual parading of shrines.