Skip to content
Aloha
So
The real Trump- Barons Father… how’s it that he isn’t in the scene right now- replaced by the a Rothchilds avatar/
Thus- where is he? Not  Mar-a-Lago?
I would appreciate more on that issue.
– Anon
My sources tell me that for safety reasons he is at the Mt. Cheyenne military base in Colorado. – Benjamin Fulford

“Schwab spoke at the WEF today, I even have audio” – Anon

Thanks so as I suspected it was a disinformation trap. I will try to confirm from someone if they actually saw him with their own eyes. – Benjamin Fulford

My friend was there and she took the picture herself. She is a WEF attendee. from France . She sent the picture to my phone by text message .

She did not pinch him as he was on stage, to check he was not a cgi … but she was in the conference room. -Anon
Thank you. Information from real people like you is very important in this day of CG and disinformation. A lot of people in the alternative media were fed the same story as a part of a campaign to discredit them. It is an old trick Henry Kissinger often uses. He would send information that he was arrested to various media outlets that were hostile to him and then he would discredit them by making a public appearance. – Benjamin Fulford

If you hold the audio subscription, the following report can be listened to Here.

Some tectonic shifts have taken place in Geopolitical power structures during the past week. The result will be the widely despised avatar “Joe Biden,” being replaced as US President by House Speaker Kevin McCarthy, Pentagon and MI6 sources say. Also, preparations to move UN headquarters from New York to Laos have begun in earnest, CIA sources in Laos say.

These changes are taking place as the main culprits for the present dysfunctional state of the planet gather at Davos, Switzerland for the World Economic Forum. As this report was about to go live, CIA sources say the head of this organization, Klaus Schwab Rothschild, Klaus Schwab would miss the opening of the WEF conference in Davos today “due to a health issue”.

However, this may be a disinformation trap designed to destroy the credibility of this newsletter by having him or an avatar appear after we report his absence. The WEF was unavailable for comment. Regardless, the criminals gathering at Davos have lost the battle for the planet earth, multiple sources agree. 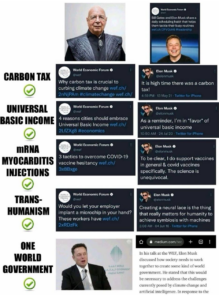 What we know is that the entire Hitler/Rockefeller branch of the ruling class has lost power. This means descendants of Adolph Hitler and John Rockefeller I including Angela Merkel, Hillary Clinton, Barack Obama, David Rockefeller Jr., etc. will be stripped of all power and titles, MI6 sources say.

To confirm if this is true, we need to see the public removal of Rockefeller Avatar, “President Joe Biden,” along with the rubber mask-wearing phony Pope Francis.

There are signs this is happening. In the US, a power struggle has resulted in a compromise wherein neither Donald Trump nor Joe Biden will be in power. The Supreme Court rejected the Brunson case to overthrow the 2020 election because it would have installed Donald Trump as president. The reason is the Donald Trump who has appeared in public since January of 2020 is a vaccine-pushing fraud. The real Donald Trump, whose son Barron was injured by vaccines, was virulently opposed to them. This means if the Supreme Court had reinstated Trump then the avatar Joe Biden, who took orders from the Rockefellers, would have been replaced by a Trump avatar who took orders from the Rothschilds.

So, serious horse-trading took place in the 15 rounds of votes it took to make Kevin McCarthy speaker of the house. McCarthy was forced, among other things, to promise to hold hearings into how the FBI was turned into a malignant force suppressing American patriots. 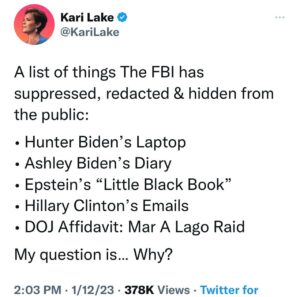 The latest intelligence we have is that Joe Biden will be removed along with Kamala Harris, the second in line for the presidency. That would make McCarthy president but only as an interim figure who would oversee new, and genuine, elections. In such an election the real Donald Trump would run.

That is why we are now seeing headlines such as this in the corporate propaganda media:

This shows they are going to use the “documents in garage” story instead of child rape and murder or selling the US government out to gangsters in Ukraine as the excuse to end the Biden farce. To reconfirm it is a farce notice how the fake Biden doesn’t blink in this video. Most likely it is CGI

We are also seeing a very strong campaign to remove “Pope Francis.” That is why we are seeing news reports a plot to remove him “began in earnest” immediately after Pope Benedict (maledict) XVI died on December 31st.

The sudden death on January 10th of the head of the Vatican Bank, Cardinal George Pell, is probably related to this battle. Pell was an ally of the real Pope Francis who decried the phony Francis as a “disaster” and a “catastrophe.” In any case, P3 sources say the fake Francis has been canceling all of his public appearances for days in a row because of “a mysterious illness.”

What we know for sure is that some sort of purge of the highest levels of power has been taking place in recent weeks with the death of top Chinese power broker Jiang Zemin, Queen Elizabeth II, Evelyn de Rothschild, Pope Benedict etc.

We are also hearing this is all related to the fact a new M1 or head of the committee of 300 and controller of the world financial system has been selected.

We have been in contact with this individual, who is a European royal you have most likely never heard of. This person says “M1 simply means Monetary One or the global underwriting of the world’s banks…. Monetary One is simply a legal signatory to all other debt. You can’t sign country debt to thin air so it has to end somewhere with someone.”

As per popular demand, we will now include subtitles on our videos!

As with the weekly newsletters, we will also allow these Q&A videos to be released for free on Thursdays. Subscribers will be allowed to share the videos on social media or their own sites on Thursdays, but must use Rumble video embedding short code. The embedding code will become available on Rumble after the video is made free.

Please leave your questions for Ben in the comment section of this post and we will pick the most voted comments to answer!

As always we appreciate and thank you for your continued support!

If you have a technical issue and can not view the video, please send a message to the support email. Please DO NOT post your technical issues in the comments as it may take us longer to get back to you.

“OMG
I was so excited to hear that the Brunson case was 5 to 4 vote….. blah blah blah
Then I go to Brunsons Telegram and it says it was denied.
Wow
I really thought you were a true journalist
I’m so disappointed”
-Anon
Yes I was disappointed too. All I can say is two separate hitherto reliable sources told me the Brunson arguments had been accepted by the Supreme Court. When I asked MI6 what happened they told me the rothschilds got the decision suspended with a promise they would hand over power. The story I am now hearing is that neither Biden nor trump will be president.
However I don’t trust these people and will ask everyone I can to keep attacking them until they really do surrender
-Benjamin Fulford