BenjaminFulford.net is a geopolitical news and discussion website from reporter and investigative journalist Benjamin Fulford.  Reports are based on information from a broad range of sources including the yakuza, MI6, the Freemasons, the CIA, the KGB, Mossad, the triads, the Chinese government, Japanese military intelligence, etc.  We go by the motto, “if it appears in writing, somebody has beaten us to the story.”  The reports provide updates and summaries of the latest events in the ongoing secret war for control of planet Earth.  This website is completely independent and is not affiliated with any corporation or governmental organization. 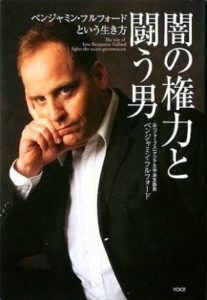 Qualifications:  20 years experience as a professional writer and journalist.  Have sold over 500,000 non-fiction books written in Japanese.  Have produced a comprehensive catalogue of scoops in field ranging from business to yakuza gangsters to high finance to government corruption.  Now focused on exposing U.S. manipulation of Japanese politics, media, and education through a combination of bribes, murder, brainwashing, etc.  My goal is to counter U.S. propaganda and expose the Japanese people to the truth so that they may free themselves from the colonial yoke and use their $5 trillion in overseas holdings to end world poverty and save the environment.

Native or near native, spoken and written:  Japanese, French, Spanish and English.  Conversational, reading ability in Mandarin, Portuguese, and Italian.

2005-present:  Have published 70 books written in Japanese with cumulative sales running at over 500,000 copies.  Have a weekly 2-hour TV show and appear frequently on numerous other nationally broadcast shows.  Have regular columns in a variety of best-selling Japanese magazines.

1998-2005:  Asia-Pacific Bureau Chief for Forbes Magazine.  Quit in profound disgust over extensive corporate censorship and mingling of advertising and editorial at the magazine.  If they dispute this, I invite them to sue me, any place, any time.

1995-1997:  Staff writer for the Nikkei Weekly and the Nihon Keizai Shimbun Newspaper.

1993-1995:  Took a sabbatical in Canada.  Did research on the link between evolutionary forces and modern world society.

1986-1989:  Correspondent for Knight-Ridder Financial News; covered a broad range of market related news.  One particularly market moving story was used by Knight-Ridder in an advertising campaign.

1982-1985:  Part-time jobs during student years included work as an editor of Hitachi Review, a science and technology magazine;  translations in the fields of business and finance, and assorted television, radio, and movie appearances.

1978-1982:  Sowed my wild oats.  Spent the time traveling and avoiding civilization.  Spent one year studying with a witch doctor along the upper reaches of the Uquyali river in the Peruvian Amazon.  Lived with former cannibals.  Total time spent sleeping outdoors was 1 year.  Lived as a wild animal in the Canadian wilderness, catching food with my own hands, etc.