The recent massacre of Sri Lankan Christians plus attacks on churches and mosques have turned into a fatal mistake for the Zionists, multiple sources confirm.  In reaction, the U.S. Department of Defense is handling background checks to root out Israeli dual citizens, agents, assets, and sayanim (Hebrew for “helpers”), Pentagon sources say.

Arab and Iranian TV broadcasts throughout the Muslim world have quoted this writer and others as saying ISIS stands for Israeli Secret Intelligence Service.  “Almost all Arabs think ISIS is created by Israel and regional governments,” one prominent Arabian TV personality confirmed.  This means that when “ISIS” claimed responsibility for various recent attacks, the satanic Israeli regime of Benjamin Netanyahu committed international suicide and lost all regional support, especially among Jews (as opposed to satanists pretending to be Jews). 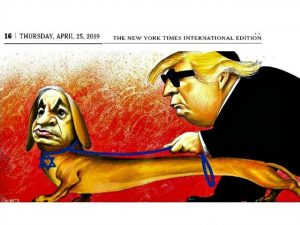 “The NYT International Edition and German dachshund is another dog whistle to Europe, Asia, and the rest of the world after Sri Lanka that Zionism=terrorism,” the Pentagon sources explain.  The sources added, “Trump is not so blind,” and “any Trump outrage is just kabuki theater, as the military intelligence community, patriots, and Europe post-Notre Dame have had it with Israel.”

“Anti-Zionism is now mainstream, as Ilhan Omar, the Democrats, and The New York Times normalize the conversation,” the sources say.  As a part of the attack on Zionists, “the Department of Justice may prosecute Chicago Jewish billionaire and Illinois Governor J.B. Pritzker for tax fraud,” the sources add.

Also, the Mueller Report is going to be followed with an anti-Zionist blitzkrieg, including the Department of Justice Inspector General’s report and FISA declassification,” the sources say.  “Trump is apparently saving Israel for last,” they add.

Speaking of Israel, a U.S. military officer involved in negotiations over the Golan Heights says the Israeli army “is fed up with Bibi [Benjamin Netanyahu] and unable to hold Golan anyway.”  The U.S. military is negotiating with the lawyer of the Arab League over the details of the return of the Golan to Syria, he says.

Germany and its EU 4th Reich regime are under siege and facing collapse due to a massive debt load and popular resistance in occupied states like France and Italy.  As a result, Germany may be forced to sell its crown jewels—the Daimler Benz Corporation and Deutsche Bank—to the Chinese, according to Japanese military intelligence and other sources.

It’s difficult for normal people to understand the superstitious mindset of these satanists, but essentially they seem to think they are in a battle against a goddess.  That is why they chose to burn “Notre Dame” or “Our Lady,” because this refers to Mary.  Mary, of course, is the Christian name for the Goddess Isis, who raised an infant until he could defeat Set or Satan.  It is for this same superstitious reason that these satanists created a horrific terror organization and tried to call in ISIS in order to weaken support for the Goddess in the minds of humanity.

The hope in sacrificing Notre Dame was to unify European and world sentiment around German Rothschild-slave President Emmanuel Macron, just like Americans rallied around George Bush Jr. after 9/11, the sources say.  Instead, according to multiple sources in the French Yellow Vest resistance, the burning of the Cathedral is being blamed on Macron and his German puppet masters.

“The desecrations of European Catholic churches and the Notre Dame arson in France may have a silver lining and lead to the firing of Pope Francis and the defrocking of French Cardinal Philippe Barbarin,” was how Pentagon sources saw the situation.  “The satanic global Jewish mafia may have signed their own death warrant with anti-Christian terrorisms in France, the Easter massacre in Sri Lanka (in which no Israelis were killed), and elsewhere,” the sources added.

Certainly a critical mass of aware people, especially in the world’s military and intelligence agencies, know that the “Islamic State” really refers to the Satanic State, i.e. Israel.  So when the “Islamic State” takes credit for the massacre of Christians in Sri Lanka and elsewhere, the real culprit, Israel, is pinpointed.

“A 21st century holy war or crusade against the Jews [Khazarian Mafia] will be led by Russia, the EU, and the USA to defend Christendom, aided by Muslims,” the Pentagon sources predict.  A group of moderate Muslims supports this statement with its move to get advisory status with the UN in order to fight against efforts to start a Muslim/Christian holy war.
https://www.emirates247.com/news/muslim-council-of-elders-requests-consultative-status-by-the-united-nations-2019-04-03-1.681933

The Muslims are fully aware that an attempt to burn the Al-Aqsa Mosque in Jerusalem at the same time as Notre Dame was burned was the work of Khazarian satanists, not Christians.

As these events show, the battle against the satanic Khazarian mafia is raging in a way that transcends traditional political, religious, and geographic boundaries.

Another example of this is the disappearance of a Japanese F-35 fighter plane off the coast of Japan on April 9th.
https://thedefensepost.com/2019/04/09/japan-f-35-fighter-disappears-misawa/

Japanese underworld sources are saying this plane was actually “sold to …

Thank you for your work.  I have a question about your note this morning about the implementation of the Quantum Financial System (QFS).

I’ve seen in other articles that you’ve written about the implementation of GESARA and a likely jubilee as it relates to the QFS.  Do you expect that GESARA (and a jubilee) will be implemented during this same time window, or will those take longer to implement (if they happen at all)?

Unfortunately, there is no indication yet of a jubilee or GESARA.  Instead, what seems to be going on is that an instant and free global payment system using mobile devices is being implemented.  Also, there is talk of a top-down campaign to try to fix up the planet.

We will keep fighting for a jubilee, but unless the world’s military move big time to make it happen, it is not in the cards yet.

The U.S. body politic has degenerated to gibberish and empty threats, as bankruptcy and collapse are now a mathematical certainty.  That’s because the March 29th Brexit made it so that “the City of London is no longer the finance capital of the cabal,” both British Intelligence and Pentagon sources confirm.

When asked, “How is President Donald Trump responding to this?” a senior British Intelligence officer said, “Probably in a blind panic by this stage, to be very honest.”

Find this hard to believe?  Let’s step back a bit and look at what has happened so far this year to the U.S. government.  First, all military veterans withdrew from the Trump presidency as of January 1st.  Then the U.S. government shut down for 35 days, even as the U.S. military stayed fully financed.

When the U.S. government reopened, Trump had filled his cabinet with raging Zionist neocons.  They managed to keep operations going by stealing the American peoples’ tax refunds and hiking U.S. gas prices.  While this gave the debt-addicted Washington, D.C. another sugar high, it has begun to kill the U.S. economic recovery.

Trump, meanwhile, has been talking like a bankrupt junkie trying to convince everybody that great events were happening by saying things like, “Saudi Arabia will buy $450 billion worth of weapons, etc.” or “China will buy more than $1 trillion worth of goods from the U.S.”  The reality is that Saudi Arabia has only agreed to buy $14.5 billion worth of U.S. exports.  Also, even if China agreed to buy $1 trillion worth of overpriced U.S. goods, the fact is that the U.S. economy does not have the capacity to create these goods.  In any case, China is seriously thinking of declaring Washington, D.C. bankrupt, according to Asian secret society sources.
https://www.politifact.com/truth-o-meter/statements/2018/oct/23/donald-trump/donald-trump-touts-nonexistent-450-billion-saudi-o/

The Trump administration is now trying to keep itself afloat by forcing countries to buy its expensive shale oil and gas.  That’s the real reason for U.S. sanctions on Iran, Venezuela, and Russia, as well as for attacks on Syria and Yemen.  But this strategy is failing because the main oil importers—Europe, China, Japan, and India—have no interest in expensive U.S. oil and gas, and these countries are not going along with U.S. “sanctions.”  For a good analysis of this situation, I recommend the article below by Thierry Meyssan, the person who first scooped the 9/11 truth.
https://www.voltairenet.org/article205987.html

Pentagon sources note that “the arrest in Spain of former Venezuelan Military Intelligence Chief, Army General Hugo Carvajal has made the military even more loyal to Venezuelan President Nicolas Maduro, as the neocon coup failed royally.”  This means the world’s largest oil reserves remain outside of the cabal’s petrodollar system.

Arch-cabalist Henry Kissinger has been trying desperately and futilely to save the D.C. establishment and his petrodollar system by cashing bonds worth “quadrillions of dollars,” according to Japanese imperial family sources.  These bonds will never be cashed, the sources say.

Instead, something called the Quantum Financial System (QFS) is being implemented, multiple sources agree.  Since Japan’s financial markets will be closed for six days between April 27th and May 6th, which would be the longest financial market and bank closure since the end of World War II, it’s a good bet the transition will be implemented then.
https://www.bloomberg.com/news/articles/2019-04-13/why-japan-s-10-day-break-has-markets-worried-quicktake

Here is Benjamin Fulford’s April 11, 2019 interview with PrepareforChange.net, which was cut off unexpectedly at a sensitive point: